Are Tracey Gold and Kirk Cameron feuding after she voiced her support to the gay community after her Growing Pains co-star shared his anti-gay beliefs? Not so much. 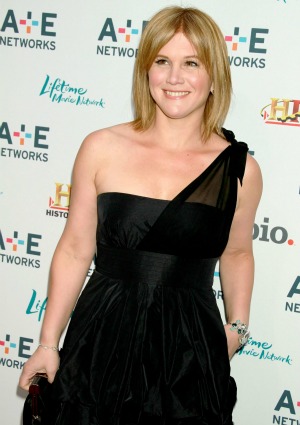 Despite voicing her support to the gay community after Kirk Cameron went off about same-sex marriage, actress Tracey Gold said there is no feud between the former Growing Pains co-stars.

“I was surprised by what he said,” Gold told E! News this morning.

“I believe in freedom of speech, but I do think it’s dangerous… I immediately thought of the teenager who’s struggling with his sexuality and hearing those comments that are so damaging and hurtful.”

After Cameron spoke his mind on Piers Morgan Tonight, Gold went on Twitter to say, “I am a strong supporter of the #LGBT Community, and I believe in equal rights for all. #NOH8 #LOVE.”

“Kirk and I are so closely linked to Growing Pains that I wanted to distance myself from those comments,” she explained to E! of the tweet, adding, “I think it’s so important for every one person who is negative, that we are louder with love and support.”

Even with their extreme difference in opinion (to say the least), Gold said she reached out to Cameron letting him know there are no hard feelings — despite his probably having really hurt several gay people who worked on their hit show with them.

“I wanted him to know that I wasn’t fighting with him,” Gold said. “I wasn’t in a feud with him because that’s where everybody went, but I was wanting my voice and opinion to be heard.”

Either way, we don’t think they’ll be attending any gay weddings together.