Coco loves her big bubble butt now — but it wasn’t always that way. Read on to find out the dangerous methods she used to try to get rid of what has since become her trademark, and how hubby Ice-T encouraged her to learn to love her booty. 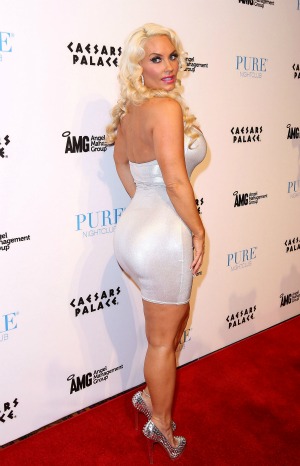 Ice may love Coco, but Coco hasn’t always loved her butt. The outrageously curvy model and hip-hop wife revealed that while she has now totally embraced her body, it wasn’t always that way. In fact, a careless remark by a casting director almost left her with an eating disorder.

She revealed her surprising insecurity to Sister 2 Sister magazine.

“When I was 18, the J. Lo butt was not in. To have a booty was not the thing. You were considered fat if you had a booty,” Coco told the mag. “I was being cast in stuff where you’ll see all these really beanpole-looking white girls with blonde hair and big boobs. That’s what I wanted to be.”

Which celeb has the juiciest booty? >>

“I was pulled aside during a photo shoot and a director told me that I needed to lose weight — that I was getting fat.”

“When I heard that I went into full craziness,” she revealed. “I went and tried everything from diet pills to cleansing to everything you could possibly do to get rid of your butt. Bulimia — I tried that but I love my food too much.”

“I told her, ‘You got a little waist and a nice, round butt.'” The Law and Order: SVU star said. “I said, ‘That’s what’s unique about you. The boobs — anybody can go buy them.'”

Catch more of this crazy couple on Ice Loves Coco Sundays at 10/9 Central on E!.