Evelyn Lozada and Chad Ochocinco are at it again. VH1’s favorite couple are getting their own TV show. They’ll star in the Basketball Wives’ spin-off Ev and Ocho, which will follow them as they plan their upcoming wedding. 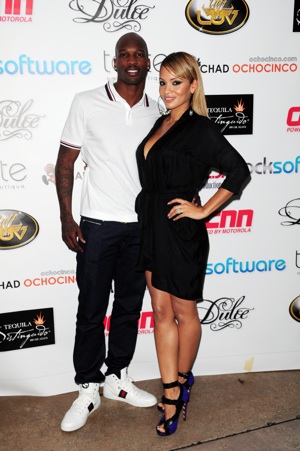 VH1 can’t get enough of Evelyn Lozada and Chad Ochocinco. The pair, who can currently be seen on Basketball Wives, is branching out. The network has green lit a new spin-off reality series called Ev and Ocho.

According to Deadline, Lozada and Ochocinco will headline the eight-episode series, which will chronicle their trip down the aisle. It’ll be followed by a two-part finale that showcases the actual ceremony.

Have we learned nothing from the Kim Kardashian debacle?

Evelyn is best known as the hot-headed diva on Basketball Wives Miami, while Ochocinco is a professional football player signed to the New England Patriots.

Over the past few years, Ochocinco’s made a name for himself in reality TV. In 2010, he appeared on ABC’s Dancing with the Stars, and followed it with stints on VH1’s The T. Ocho Show and the dating competition, Ochocinco: The Ultimate Catch.

Both Lozada and Ochocinco are famous for their over-the-top antics, which equals ratings gold for VH1. On Basketball Wives, the couple’s gone through their fair share of ups and downs, including issues of trust and infidelity.

Ev and Ocho premieres this September.