Prince Harry might be a huge jokester, but at least one person in his famous family has him beat: His grandmother, Queen Elizabeth! 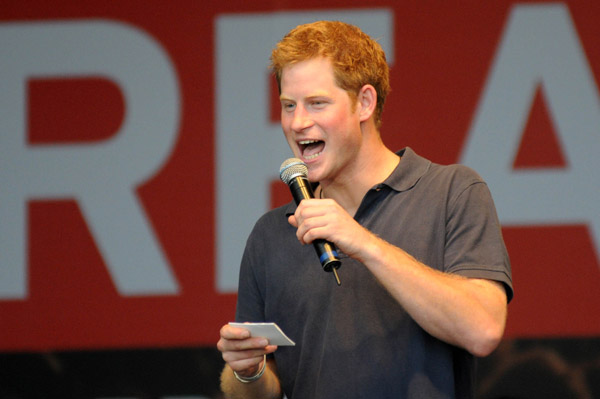 Prince Harry might be a cheeky boy, but he insists his buttoned-up granny is a lot funnier than he is! The red-headed Prince — finishing up his Diamond Jubilee tour in Brazil — told reporters that Queen Elizabeth II is actually pretty hilarious.

“They are very funny together. My family is the same as any other family when it comes to humor behind closed doors,” he said of his family. “Though I’d like [to] think I was funnier than my grandmother.”

The 27-year-old added that his grandfather, Prince Philip, is to thank for his grandmother’s sense of humor.

Prince Harry spent his week in Belize, the Bahamas, Jamaica and Brazil doing everything from sampling rum to charming housekeepers. He even beat Olympic sprinter Usain Bolt in a race, though the Prince actually just cheated.

“About five days to a week before, I was thinking to myself, whatever it is, I’m going to catch him and catch him when he’s off guard,” Harry joked on Sunday. “He thought about taking me on, but he’s a bit slow!”

The Prince will be active in the upcoming Olympic summer games in London, he revealed, adding that he’ll be working with his brother, Prince William, and his sister-in-law (awww!), Kate Middleton.

“The three of us, my brother and my sister, will be as involved as we can be. I still love my sport, maybe not quite so much in this heat.”

All joking aside, the Apache helicopter captain told reporters that he appreciated all of the love for his family and that he didn’t realize what a big deal they were there.

“I personally had no idea how much warmth there was towards the Queen. To me that’s been very humbling, and I was actually quite choked up seeing the way that they’re celebrating her 60 years.”

Next up for Harry? He’s headed home to the U.K. and training for a possible return to Afghanistan with the British army.