Singer Taylor Swift might be singing the blues, but it’s not about her finances. The “Love Story” singer tops the list of Billboard’s richest musicians and you won’t believe how much money is flowing into her bank account! 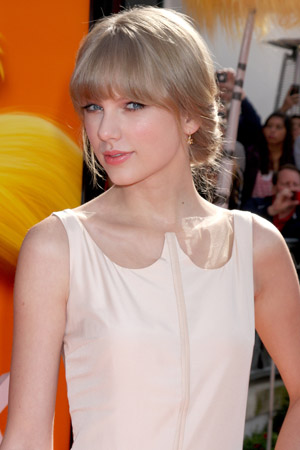 Taylor Swift has built a business out of syrupy sweet love songs and bitter breakup tunes — and business is good! So good, in fact, that the pretty blonde tops Billboard‘s list of 2012’s top money makers with a whopping $35,719,902 grossed in 2011 — more than all of the other female artists on the list combined.

“Grossing $88.5 million in the U.S. alone, the [Speak Now] tour netted Swift a remarkable $29.8 million. Honored as Billboard‘s Woman of the Year in December, she racked up U.S. album sales of 1.8 million units last year — led by booming business for late 2010’s Speak Now, which sold 967,000 units and digital single track sales of 7.8 million,” Billboard wrote in its tabulation of her riches.

A good portion of her cash pile comes from her songwriting royalties, since she wrote all of the songs on Speak Now herself.

So, what does Swift do with all her cash? She buys stuff for other people.

“Now I’m in a better position to be a bigger tipper when I’m out at a restaurant. People don’t expect it and you can make their day,” The Lorax star said in 2009. “I like going through a Starbucks drive-through and paying for the person behind, just because it’s nice.”

She has bought a few big-ticket items since hitting the big time, including a couple of homes in Nashville and Beverly Hills. However, she’s not about to go broke anytime soon, thanks to life lessons from her family.

“I think it’s crazy as a star that you get free stuff when you can afford it,” she told the U.K. Daily Star in 2010. “I don’t spend a lot of money. My dad is a financial advisor and has given me a lot of advice.”

Maybe Swift’s next venture can be a financial planning class for her young fans? We all could use some financial education in this tumultuous economy.

What are the odds that Taylor Swift will dance in her bra?
Taylor Swift gets flirty with Zac Efron
Taylor Swift’s “Safe and Sound” video premieres