Olivier Martinez isn’t about to play the public relations game when it comes to talking about his girl, actress Halle Berry. Find out how reacted when asked about their rumored engagement. 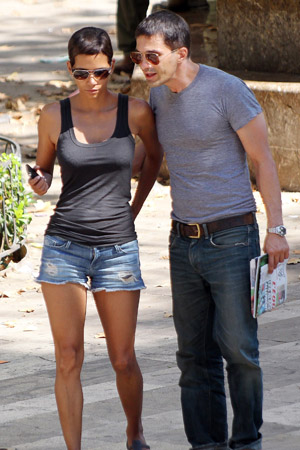 In a world where celebrities guard their privacy like hawks, it’s nice to know that at least one can be upfront about his relationship situation. French actor Olivier Martinez was up front when he was recently asked the question we all want to know: Is he engaged to actress Halle Berry?

Word of the couple’s engagement emerged in January and only intensified when Martinez’s ex, Australian pop singer Kylie Minogue, tweeted well wishes to the couple.

“Congrats to Olivier Martinez and Halle Berry!! #wedding,” she wrote after the rumors emerged.

It looks like it was true all along, but Martinez denies that jeweler Gurhan had anything to do with the rock he bestowed on his lady love.

“There is a jeweler taking credit for doing the ring and it’s a lie! They have nothing to do with this,” he said. The real jeweler was Robert Mazlo, “a real artist” from Martinez’s Paris neighborhood. The actor said his jeweler of choice belongs to a family that has been designing jewelry for “kings and queens for many centuries.”

Will this one work? Spies say yes.

“[She] had given up on being married, but she trusts Olivier. He makes her feel safe. He’s a keeper!” a source said of her new man. Good thing, too — she’s been married twice before and broke off a tumultuous relationship with her daughter’s father, Gabriel Aubry, in 2010.

And Berry will have her man by her side while she fights with Aubry for custody of their adorable little girl, Nahla. The actress just hired a new lawyer to battle her ex, though sources say Aubry is willing to fight to keep his baby girl in the U.S.

“Neither Gabe nor his lawyer are scared or intimidated by Stephen. Gabe thinks this will help his case, because he thinks it shows how desperate and impatient she is,” a source told RadarOnline. “He doesn’t believe either that Halle is afraid for her safety, when was the last time you saw her taking Nahla to school with a bodyguard? He believes it’s just another plot she is hatching to keep Gabriel out of Nahla’s life.”