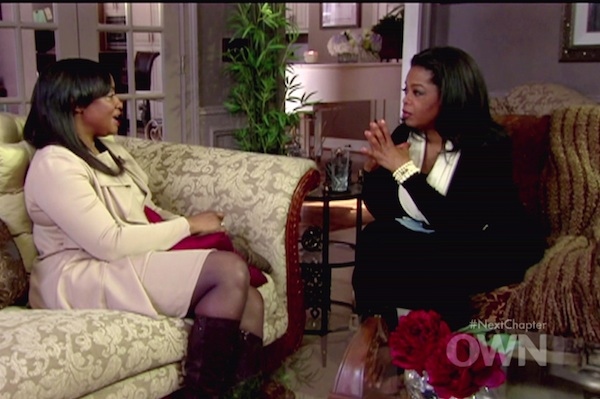 Bobbi Kristina Brown will open up to Oprah >>

Pat described her relationship with the Grammy-winning singer as best friends for over twenty years. Whitney spent time at her brother and sister-in-law’s house to get away from the harsh scrutiny of fame, to “decompress,” as described by Pat.

The need to “decompress” was high throughout Whitney’s career. Houston’s most memorable role came at the height of her fame in 1992, that of a pop music diva in The Bodyguard. Houston sang “I Will Always Love You,” originally by Dolly Parton, for the movie’s soundtrack. The film, billed as a romantic thriller, was a huge commercial success and garnered Academy Award nominations for Houston’s “Run to You” and “I Have Nothing.” Warner Bros. plans to release The Bodyguard on Blu-ray March 27, 2012 as the film celebrates its 20th anniversary.

Oprah and Pat discussed Whitney’s issues with substance abuse shortly after their talk began. When asked by Oprah when Pat first knew there were drug issues in Whitney’s life, Pat revealed her concerns began in the late 1990s.

It wasn’t until a 2002 interview with Diane Sawyer that Whitney Houston publicly admitted her struggles with cocaine, marijuana and prescription pills. An overdose of recreational drugs is not suspected to be a factor in Whitney Houston’s cause of death.

Pat Houston was also candid about her feelings for Whitney Houston’s ex-husband, Bobby Brown. The troubled R&B singer was often linked as the one to introduce Whitney to illicit drugs. Pat denies that accusation. “I can’t say that he introduced her to drugs. I don’t think that’s true.” Whitney divorced Brown in 2007.

“Were they good for each other? You could never tell because there was so much outside interference. Their realities were different than everyone else’s… I do believe they loved one another.”

Pat Houston was the third person to discover Whitney Houston’s body. She retold the experience with extreme sadness, tears streamed down her face.

“Mary’s at the door and she’s screaming, ‘Oh my God!’ I told her to calm down without even seeing anything. When I got into the room, I saw Gary trying to revive her the point of exhaustion.”

Pat confirmed Whitney was pulled from the tub but explained she doesn’t know how Whitney “ended up” in the tub.

Oprah asks if Pat believes drugs were an issue prior to Whitney’s death given the reports of Houston’s erratic behavior. Pat firmly refutes that speculation, “High? Absolutely not… Leading up to it [her death] I would say no.”

When asked by Oprah if Pat has accepted the death of Whitney, Pat answers, “I haven’t had a moment to even reflect. I have to stand for her even with her being gone.”

Oprah concluded her interview with Pat Houston on a somber but hopeful note. Pat solemnly stated she knows Whitney Houston is in a better place. “She really is at peace. She gave it her all.”