Though Hamm and Hendricks have yet to couple up onscreen, the lead actor of Mad Men is fond of his co-star’s beautiful physique. 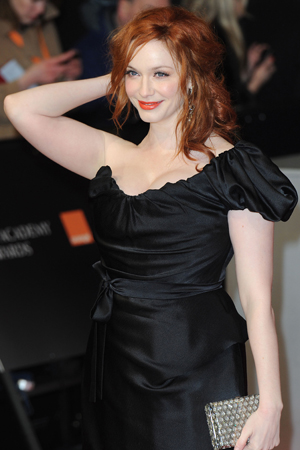 Though Mad Men fans will argue that actress Christina Hendricks is absolutely gorgeous, her curvaceous figure has often been a point of contention when it comes to evaluating Hollywood hotties. And fellow actor Jon Hamm isn’t happy about it at all.

In a new interview with Elle UK, the leading man of Mad Men considers his co-star to be stunning, but he says that their television show has yet to revive the 1960s general notion of feminine beauty in today’s culture.

“I can’t say Mad Men has changed anything,” he says. “It’s a spike, a blip.” What exactly does he mean, in regard to Hendricks?

He responds, “I think Christina Hendricks is a beautiful woman, but we live in a culture where the beauty model is significantly different from Christina’s silhouette. It shouldn’t be — those of us who live in real life realize, especially as we get older, that beauty isn’t just 22 years old, blonde, skinny with big t*ts.”

He explains, “Those of us that have lived with and actually seen a real woman naked and made love realize there are many, many iterations.”

Hamm also acknowledges the ideal male body image, and how he doesn’t physically fit that mold either.

“There is obviously pressure to look a certain way, but I’ve also been very fortunate not to be known as the dude with the rock-hard six pack — I’ve never had to be that guy,” he admits. “Even if I have to take my shirt off, it’s OK if it doesn’t look like the cover of Men’s Fitness magazine. That’s a lot of work.”

Jon Hamm hates on reality television royalty
Elisabeth Moss is dying to be a bad girl
How mad was Matthew Weiner when fighting for Mad Men?