If your life’s events includes having a precious Superman comic book stolen from you and sold for $2.1 million, you should definitely make a movie about it. 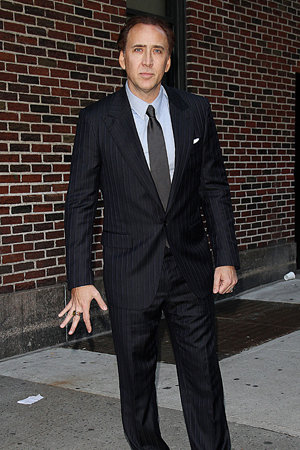 Nicolas Cage’s superhero movie career is about to mirror his reality. After headlining the Ghost Rider franchise and starring in The Sorcerer’s Apprentice, the seasoned actor’s next film project is based on a crime from his own life.

It’s a crime that found him to be the victim. According to The Hollywood Reporter, a rare comic book of his was stolen — one that features the very first appearance of Superman — back in 2000. The issue was then recovered in an abandoned storage locker in 2011 and sold for a record $2.1 million at an auction.

THR reports that a scripted version of these headlines has been picked up by Lionsgate. Entitled Action No. 1, the heist comedy is written by the creators of Reno 911!, Robert Ben Garant and Thomas Lennon. The film narrates the plans of a group of nerds who try to steal the actor’s copy of the landmark 1938 issue.

Interestingly enough, the part of Nicolas Cage in the film was written with the actual actor in mind, but it is unlikely that he will play himself onscreen. No word yet on who will!

Also, Jason Statham’s name has surfaced in discussions about who to involve in the film project, but he has not yet been tapped for any specific role. Will The Expendables hottie play Nicolas Cage in Action No. 1? It’s hard to imagine him as one of the nerds who are after the comic book, but we wouldn’t mind it either!