What happens when a soft-body slacker leaves his mother’s basement? Signs from the universe reveal his unexpected destiny! And the destiny of his brother. And even his mother? 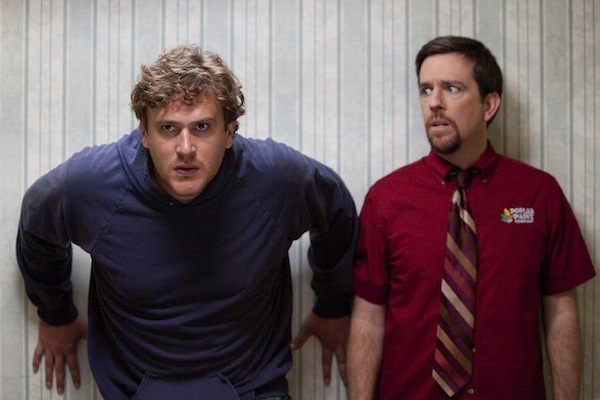 Meet brothers Jeff and Pat, played by Jason Segel and Ed Helms. Each expresses his arrested development in a different way. Pot-head Jeff sits in his mother’s basement looking for “signs” from the universe while Pat splurges on a Porsche without consulting his neglected wife. When their mom Sharon, played by Susan Sarandon, sends Jeff to the store to buy some wood glue to fix a broken shutter, Jeff and Pat go on an accidental adventure that involves crashing the shiny new Boxter, getting beat up and possible infidelity. All this is more than either Jeff or Pat bargained for, but rude awakenings tend to happen to people living in denial. And painful as they are, this movie gets a lot of mileage out of the awkward situations these brothers discover themselves in as they wake up to their own lives.

Not surprisingly, the apple doesn’t fall far from the tree. Mom has her own river in Egypt. When she finds out she has a secret admirer, her dream of “kissing under a waterfall” comes to fruition, but not quite as she envisioned it. Instead, her fantasy happens with another woman under the sprinklers when the fire alarm goes off. The point is that we can fulfill our dreams if we’re willing to let go of a few minor details.

Ed Helms and Jason Segel play off each other well in that annoying, condescending way real brothers do. But what starts off as a comedy takes a dramatic turn halfway through the movie, trading jokes for serious soul-searching. Jeff Who Lives at Home becomes more of a meditation on managing our expectations of other people and most importantly, ourselves.

Bottom line: This film is oddly sweet and surprising, if a little uneven tonally. But the writing/directing team of the Duplass brothers gives us relatable characters who prove there are heroes in all of us, if only we look at our true reflections and not the images our egos wish to portray. No easy feat on film or in real life.