Ashton Kutcher has a new love in his life, Lorene Scafaria. The pair were linked over the holidays and were spotted last week getting cozy together in Los Angeles. 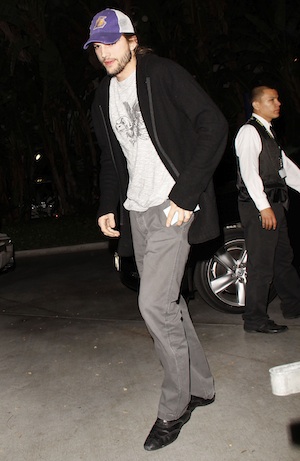 Ashton Kutcher has a new girlfriend, Lorene Scafaria. Us Weekly reports Ashton and Lorene were spotted playing laser tag in Los Angeles last weekend and were all smiles. Scafaria showed off her new strawberry blonde locks along with playful face paint matching Kutcher’s. A source for the magazine confirms the pair seemed to really enjoy each other’s company.

“They were affectionate,” says the source. “When they thought no one was watching, they held hands, and she rubbed his back and neck.”

Back in December, Ashton Kutcher’s rep denied the two were involved. The two were linked shortly before New Year’s Eve when they were photographed in Italy having lunch. Us Weekly believes Kutcher and Scafaria have been an item since then, despite Kutcher’s official statement.

People magazine notes Scafaria isn’t a stranger to Hollywood romance. She dated 32-year-old Adam Brody last year. Brody and Scafaria were seen at the Scream 4 premiere together. No word on what drove Brody and Scafaria to their separate ways.

So just who is Ashton Kutcher’s new flame? The 33-year-old is from New Jersey and is a screenwriter. Scafaria is most known for writing the 2008 film Nick and Norah’s Infinite Playlist, an adaption from David Levithan’s novel of the same name. She’s also a singer and contributed to the soundtrack of Drew Barrymore’s 2009 film Whip It!

Demi Moore may not be thrilled at the news of her ex moving on so fast. Moore was last spotted exiting a private jet after some vacation time in Turks and Caicos. Demi spent time at Cirque Lodge for treatment related to “an eating disorder and addiction issues.” Demi Moore filed for divorce from Ashton Kutcher when reports of him cheating over their anniversary weekend surfaced.

Who knows how long Ashton Kutcher and Lorene Scafaria will last as a couple. Given Kutcher’s past problem with monogamy, it may be over sooner rather than later.