Add Jon Hamm to the list of people who are disgusted by the likes of Paris Hilton and Kim Kardashian. Says Hamm, “Being a f*****g idiot is a valuable commodity in this culture.” 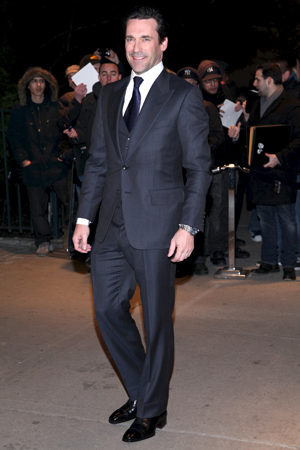 The many, many months without Mad Men on the air have been somber. No midday cocktails at the office, no witty catchphrases from Elisabeth Moss’ character Peggy to cheer for, no amazing 1960s interior design to admire. It may have taken a long time for the series to return to AMC, but that’s because it takes more production and negotiations to continue an award-winning show over anything that’s classified as reality television.

In a new interview in the April issue of Elle UK, actor Jon Hamm slams those who make their fame through reality television: “Whether it’s Paris Hilton or Kim Kardashian or whoever, stupidity is certainly celebrated,” he says. “Being a f*****g idiot is a valuable commodity in this culture because you’re rewarded significantly.”

It’s not just the people he seems to be disgusted by, but also how society rewards them. “Incuriousness has become cool… It’s celebrated. It doesn’t make sense to me,” he added, according to The Huffington Post.

Hamm also comments that he doesn’t understand why blonde, skinny women have become the archetype for feminine beauty in today’s “idiot culture” and argues that women with curves — such as his co-star Christina Hendricks — are more appealing.

And shockingly, he doesn’t see himself as attractive either! “I don’t even consider myself handsome,” he says. “When I look in the mirror I see my goofy-assed self from when I was a kid.”

Elisabeth Moss is dying to be a bad girl
How mad was Matthew Weiner when fighting for Mad Men?
Is the new Mad Men promo too 9/11-ish?