Dick Van Dyke has been swept away by Leap Day love! Word breaks the 86-year-old has taken a 40-year-old wife. 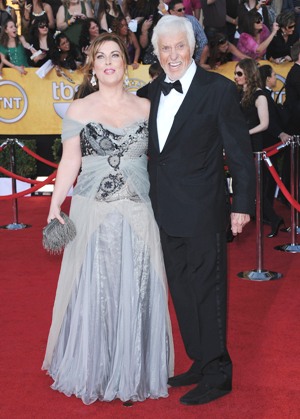 Sorry ladies, Dick Van Dyke is a married man! The 86-year-old has tied the knot with Arlene Silver, taking him officially off the singles market. Dry your tears and take heart in knowing he’s happy and in love.

Dick Van Dyke and his 40-year-old bride exchanged vows on Leap Day 2012. The pair, who met six years ago when she did his makeup for the SAG Awards, married on impulse.

Admitting he was “bowled over by her beauty,” upon their first meeting, Dick Van Dyke kept Arlene by his side by hiring to her to be his personal makeup artist. The two soon became friends and later began a romance.

“The last couple of years we kind of fell in love,” the actor told RumorFix. “She keeps up with me.”

Speaking of their unusual wedding date the Diagnosis Murder star commented, “It was on the spur of the moment, we just decided Leap Day would be the best time to do it.”

This isn’t the first marriage for Dick Van Dyke. The father of four was married to Margie Willett for 36 years before divorcing in 1984 after a long separation. He then went on to have a 30-year relationship with partner Michelle Triola, until her death in 2009.

Happy to once again have love in his life, the octogenarian commented, “I’m not a loner. I have to have a life partner. I found the perfect one.” Of her new husband Arlene said, “He’s the happiest person I ever met. He’s got an infectious spirit.”

Here’s hoping Dick Van Dyke and Arlene Silver have many years of wedded bliss to come!