Former Transformers actress Megan Fox recently revealed that she wants to become an archaeologist. Is she saying goodbye to acting forever? 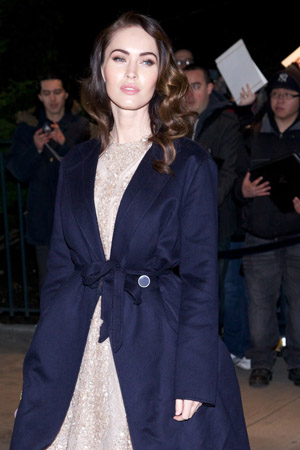 Is Megan Fox giving up Hollywood — and her (alleged) love of Botox — for the great unknown? Probably not, but the Friends With Kids actress recently revealed that she’d love to become a certain type of scientist.

“I would really love to go on an archaeological dig,” she told Ellen DeGeneres on Thursday. “I have an offer to go somewhere in England, but I would rather go to Egypt or Syria or some place like that.”

You probably want to skip Syria for the time being, Megan.

We never would have guessed Fox was the investigative type, but hey — we all have our dreams. The actress went on to reveal that she doesn’t have a lot of experience when it comes to the real “working world.”

“My only real job that I ever had was I worked at a little smoothie shop in Florida,” she said. “I mostly worked behind the register, but once a week, usually on Fridays, someone had to dress up as a fruit and go out and stand by the highway… I was a banana. A giant banana.”

Interesting. It sounds like there’s a lot of things the wife of Brian Austin Green is up for doing, except one big thing: She wouldn’t have a baby with a pal, like in her new film.

“I could never do it,” Fox said. “I could never pull it off. But maybe some people could get away with it and be happy with the results. I just… I worry about it.”

The actress plays step-mom to Green’s son with actress Vanessa Marcil, Cassius. She does want her own little munchkins, adding that she wants “at least two, probably three [kids]. I’ve always been maternal.”

Do you think Megan Fox could make it as an archaeologist, actress and mom?