Eva Longoria and Eduardo Cruz have split after a year of not-so-secret dating, friends of the couple confirm. 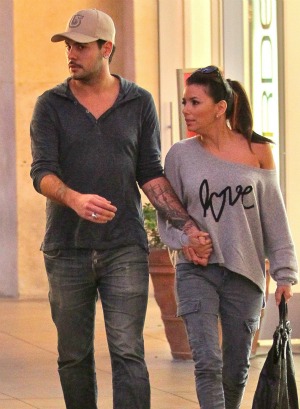 Meet cute on a yacht, romantic dates, lots of PDA and zero confirmation of a romance — all the makings of a hot Hollywood hookup. But the fairy tale is no more for Eva Longoria and Eduardo Cruz, who just broke up after a year of dating.

The couple, who insisted they were “just friends” despite being seen with this writer’s very own eyes smooching at LAX, have called it quits, and Eduardo — brother to star Penelope Cruz — has returned to his native Spain, a source told Us Weekly.

“It was a mutual decision,” a Longoria insider explained. “They are staying friends.”

“She’s focusing on work and the end of Desperate Housewives.”

Eva and Eduardo met on a yacht in Florida at a party thrown by Penelope in February 2010, and started seeing each other just a month after her divorce from NBA star Tony Parker was finalized.

No matter what, Longoria still believes in love — even after two divorces and this most recent split.

“There’s a reason I fell in love and got married. I believed in it,” she told Spanish Vanity Fair in November. “Supposedly I should be angry, resentful and disillusioned about relationships. But I’m not.”

Longoria’s rep had little to offer by way of confirmation, saying only, “We have no comment, as we do not comment on the personal lives of our clients.”

Watch Eva Longoria on the final season of Desperate Housewives, Sundays at 9/8 p.m. Central on ABC.