Scout Willis is mucking up Twitter with fake accounts and disturbing tweets. Either the daughter of Bruce Willis and Demi Moore is on a class assignment, or there’s one heck of a cover-up story being told. 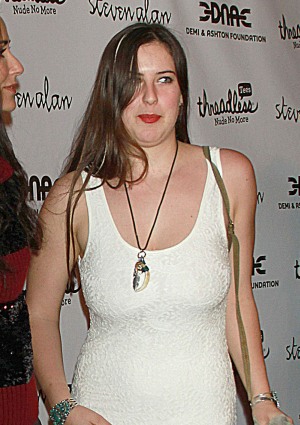 Scout Willis has been up to a little Twitter trickery. Why would the daughter of Demi Moore and Bruce Willis be posting disturbing messages under a fake name? Apparently her professor made her do it.

Gossip detectives at IvyGate.com figured out Scout Willis, who attends Brown University, has been tweeting under the account name @BOUGPUNK. Below is a sampling of the messages the 20-year-old sent out in recent months:

A statement from a rep for Scout Willis addressed the disturbing tweets Thursday:

“In connection with a class assignment, in which students were asked to create a ‘culture jam’ or ‘hoax,’ three students created a satirical and fabricated Twitter account in which everything tweeted was fictional.

“This was done to illustrate how social media is utilized and that in today’s social media culture, you can create a significant twitter following based entirely on fabricated lies, and that the more outrageous and controversial the fabricated statement, the more followers you will get.

Do you think Scout Willis’ Twitter “lies” are a great assignment, or just a great cover story?