Michael Lee West introduces us to Teeny Templeton, chef-extraordinaire in the making. She’s feisty, funny and a wonderfully sassy heroine to welcome readers to this brand new series. The quote from Janet Evanovich on the cover of this novel is perfectly apt — after all, Teeny is easily reminiscent of a younger Stephanie Plum. Fans of Evanovich should definitely make Gone With a Handsomer Man a must-read.

Teeny Templeton thinks her life is moving along pretty spectacularly, that is, until she heads home one day and finds her beloved fiance playing, of all things, naked badminton with some spectacular looking 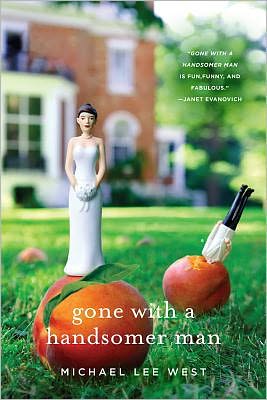 women. Upset and angry, Teeny does what any other woman would do — she lobs a peach at her soon-to-be-ex-fiance, which doesn’t exactly thrill him. Though her reasons were understandable, Teeny’s fruit-throwing lands her in jail and she is slapped with a restraining order by her most-definitely-ex-fiance. While Teeny is devastated by this turn of events, she knows she has to pick up and move on.

That is, until a few days later when Teeny’s ex-fiance is found murdered. Of course, Teeny is the first suspect on the police’s list — her fruit-based assault is, unfortunately, on record against her. But finally, luck is on Teeny’s side. She happens to run into the guy she loved oh so long ago, Coop, (the one that got away) and he just happens to be a lawyer. He agrees to help Teeny defend herself, and together, they begin to search for the real murderer.

Rounding out the cast with fun, eccentric characters and focusing on delectable descriptions of Teeny’s baking, Michael Lee West introduces a fun, quirky heroine readers will love to root for. Will Teeny be able to prove that she isn’t guilty of murder by finding the real culprit? And what about those sparks between Coop and Teeny — will she finally find happiness?

Must read: The Sleepy Hollow Family Almanac by Kris D’Agostino
Must-read: The Next Always by Nora Roberts
Must-read: The Four Ms. Bradwells by Meg Waite Clayton