What happened to Heidi Klum’s marriage? In the midst of a split from Seal the Project Runway star has kept silent — until now. Read on to find out what she had to say about her heartbreak. 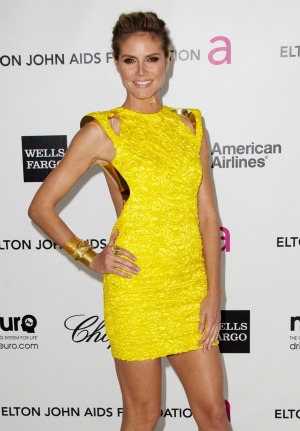 Heidi Klum and Seal seemed like they had it all: A successful marriage, a gorgeous young family, love, happiness and success. Then it all came crashing down around them, leaving a confused public — who thought they were the perfect couple — bewildered. What happened?

The supermodel opened her heart in the new issue of Elle.

“I feel like I’m in the eye of a tornado,” she says in the April issue of the mag. “It’s emotions inside of your body that are a tornado. And then the outside world doing all this craziness — with you wanting it or not wanting it — is another tornado. But as hard as it is, so is life.”

“Sometimes I think a curveball just comes at you. Instead of something straight that you can catch, it hits you in the head from the side that you didn’t expect.”

Seal won’t shut up about that divorce >>

Yeah, yeah, yeah — we want details. Did someone cheat? Was Seal’s alleged fierce and swift temper to blame?

“People don’t need to know who did what,” Klum refused. “I don’t want to talk positive or negatively about the ups and downs that we had. Every couple goes through things. Unfortunately, we’re in the public, so the highs are out there. But I don’t think it’s necessary for, especially for our children, to have the lows being printed in magazines and talked about.”

Those gorgeous kids of hers make her feel the most beautiful now, she said.

“To be honest, it’s with my children. In my job, people tell you that all the time: ‘This shoot was great. You look amazing.’ But you never know what they say when you turn away. But the kids don’t edit anything. When they kiss you and tell you they love you and say, ‘Mama, you’re the best’ — that’s really the only thing you care about.”

Read the entire interview with Heidi Klum in the April issue of Elle, on newsstands March 20.