Justin Bieber’s Johnson is out and on full display. Want to take a look? Okay, but you can’t touch, and you have to be very quiet or you’ll scare it. 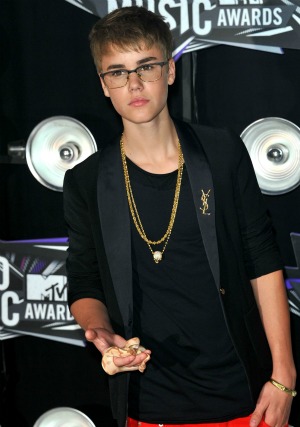 Want to get up close and personal with Justin Bieber‘s Johnson? It’s cool, he’s legal now, he just turned 18. It’s kinda beige and wiggly and if you squeeze it too tight it will hiss at you.

Wait, what? People, what did you think we were talking about here? Oh, you have a dirty mind. Johnson is Justin Bieber’s pet snake, you pervs. Or was his pet snake. The boa constrictor that the teen idol carried around at the 2011 MTV Video Music Awards has a new home at the Reptile and Amphibian Discovery Zoo in Owatonna, Minnesota — and you can go see it for yourself.

“This is Johnson, he’s the newest addition to our zoo,” Jamie Pastika, director of the zoo, told KIMT TV.

“We’ve been letting him acclimate to life at our zoo making sure everything was going well with him, he was feeding well and adjusting to life before making him more visible,” she explained. “He’s missing some of his dark color pigment so in the wild this animal would have a very hard time surviving without as much camouflage as the others.”

How did this little zoo get their hands on Bieber’s Johnson? A generous benefactor, of course.

“Through a charity fundraiser we ended up with someone buying Johnson and donating him to our zoo,” Pastika said.

It pays to be BFFs with Justin Bieber >>

Turns out that benefactor is no fan of Bieber or the teen’s apparent disregard for the well-being of his own pet. The singer auctioned the snake off for charity last fall.

“I found it really disgusting that celebrities like Bieber would stoop to a level of using living creatures as a fashion accessory and then so easily discard it,” auction winner Michael Kronick told E! News.

“I am a huge pet and animal lover and was amazed that Mr. Bieber would actually auction off his own personal pet,” he continued.

Get a good look at Justin Bieber’s Johnson in this video:

So there you have it, folks: Justin Bieber sold his Johnson to the highest bidder and if you go to Minnesota you can get a good eyeful.