Who is this sex pot and what has she done with Elisabeth Moss? Mad Men‘s serious career girl gets sassy in Page Six Magazine — in more ways than one. 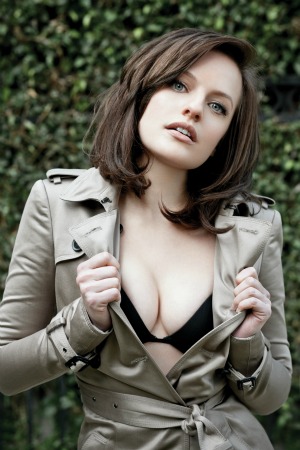 Elisabeth Moss always plays the good girl, but now this good girl has gone bad. The Mad Men actress got sexy and sassy in the latest issue of Page Six Magazine, dishing on everything from her short-lived marriage to Saturday Night Live‘s Fred Armisen to the new season of her hit show. Here’s what she had to say.

On her SNL ex:

“I’m probably gonna get a slap on the wrist. But I’ve just been such a good girl. And sometimes you just want to be a bad girl for a minute.”

On her sexy cover look:

“People will be surprised. I don’t walk around in a Burberry trench coat and bra all the time, but it’s fun to embrace that part of yourself. I think every woman has a sexy, adventurous side.”

“It’s fun to go out at night and not know what’s going to happen. I’m addicted and obsessed with my freedom in that sense. I’m having fun!”

On being a feminist icon:

“As women in the workplace, we’re constantly trying to find a balance between being taken seriously and feeling sexy and good about ourselves… If you believe your ideas should be respected and if you believe you have a voice, then you’re a feminist.”

On the kid issue:

“I have a tremendous amount of respect for my mother, and it makes me want to be a really great mother. And sure, in an ideal world I can do it all. But I think for now I’m too young to know. You almost have to get older to understand that you’re too young to know.”

On the new season of Mad Men: