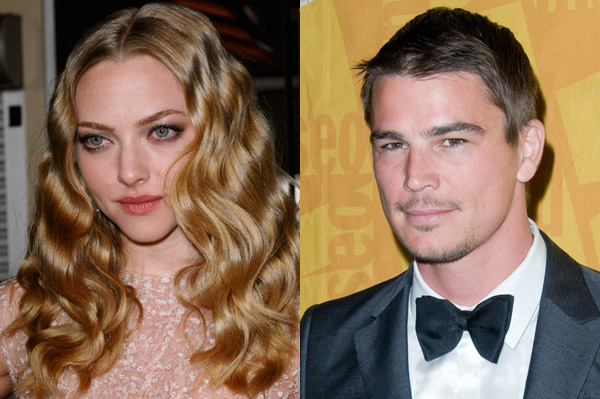 Actress Amanda Seyfried’s list of ex-boyfriends reads like a who’s who of Hollywood: She’s rumored to have dated everyone from Justin Timberlake to Ryan Phillippe. The latest on the list? Actor Josh Hartnett.

“Josh likes to keep things low-key, so they’ve just been hanging out,” a Hartnett friend revealed to US Weekly, adding that a pal set them up.

It must be casual: The actress was dating real estate broker — and Timberlake pal — Justin Huchel until Valentine’s Day, according to the New York Post.

However, Seyfried still considers her Mamma Mia co-star, Dominic Cooper, to be her last “real” boyfriend, even if he didn’t exactly see their relationship the same way.

“[It is] one of the easiest things in the world,” she said of falling in love on a set. “You’re both open. You’re put in a situation where you have to make out with each other. It’s easy for things to get carried away.”

“But to be honest,” she said, “all that sex-symbol stuff went way over my head. I just found him funny and it was like we were the same person — except that he’s British, almost 30 and a man! We both look like frogs with our wide-set eyes, we’re both indecisive and neither of us has a lot of willpower.”

However, Cooper was still with his longtime ex, according to Seyfried.

“I got my heart broken pretty hard,” the 26-year-old told ELLE last year. “After that, it’s really hard to open myself up to a new person. Really hard.”

She wasn’t exactly the most faithful, either — she revealed to the women’s magazine that she was casually seeing hottie Alexander Skarsgard while dating Cooper.

“We dated,” she said of the True Blood actor. “He’s super funny, but I was too involved with Dom.”

Um, Amanda — we’re more than willing to help you out with your dating dance card. Just let us know which guys you can’t handle and we’ll take over.