Actress Uma Thurman recently revealed that she’s pregnant with her third child. Now, sources are letting us in on another secret: She’s having a baby girl! 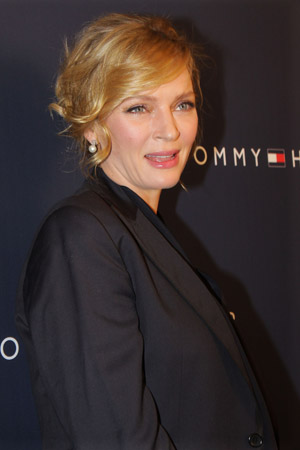 “She’s usually so skinny, but now she has the cutest little bump and a glow about her,” a source told US Weekly before the official announcement. Now, Life & Style is saying that she’s having a little girl to add to her two children with ex-husband Ethan Hawke.

“She’s happy and just a few months along right now,” the snitch told the magazine. “She’s due in late summer.”

We’ve reached out to Thurman’s rep to get confirmation, but it’s likely she’ll want to keep the happy news under wraps for a little while longer. The daughter of famed Buddhist writer Robert Thurman recently told Harper’s Bazaar that she’s learning to bring peace back into her sometimes chaotic love life.

”I have something I would really like to express about my love life,” she told the magazine. “I’m happier with it now than I’ve been in many, many years. Yes, I’m trying to have as peaceful a personal life as possible.”

With that peace comes the realization that acting isn’t as serious as people make it out to be. Thurman recently told Stylist that she tried to communicate that to her Bel Ami co-star, Robert Pattinson.

“He’s very serious. He did a huge amount of rehearsals in his own time. I think that’s what you do when you’re a young actor, when you take your work very seriously and want to take it to the next level,” she said.

“When you’ve been doing this a really long time, it’s hard to take it all so seriously. I said to him, ‘Don’t get too upset about it, because, before you know it, Twilight will just be an old film that made you lucky enough to get another job. But when you’re in that position and you’re young, it’s hard to hear through the noise.”

So, basically she told him that soon he’ll be a has-been, so don’t try to be a great actor. Sage advice, Uma… or not.