Can women advise for men’s fashion? Of course they can, says Jessica Simpson and Nicole Richie. Their scorn is revealed on NBC’s Fashion Star. 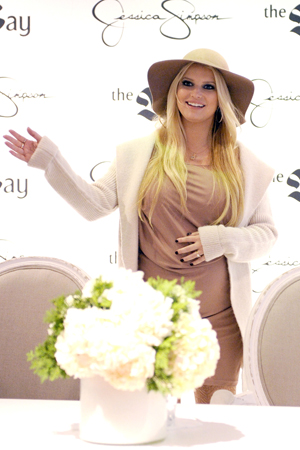 John Varvatos politely notes, “You know, I think you have a nice take on a biker jacket but there’s a lot of biker jackets out there though, and one really needs to define themselves on their own.” The design contestant nods in agreement and appreciation.

Jessica Simpson then offers her opinion. “I wish I could’ve seen different hardware, you always see zippers where they’re kinda not supposed to be…”

However, she is then interrupted by Bowes, who defends his work by insulting Simpson: “I think it’s a very fashion-forward piece; if you understood what was going on right now, you’d probably understand that that look is going on right now with men’s fashion.” The audience lets out a sympathetic “aww” for Simpson, who begins to brew in her seat.

Nicole Richie gathers a bit of Bowes’ female hate as well. She critiques, “I was definitely a little distracted by the styling. The shorts and the cowboy boots really threw me off because it was this rock ‘n’ roll look, and then all of a sudden, your last model came out and it looked like the top half of him was going to a rock concert and the bottom half was going line dancing. I was like, wait, what state are we in, what’s happening…”

The seasoned designer is also interrupted by Bowes: “Well, everyone’s got their own opinion… you know, John’s advice from a guy’s point of view is not bad, but it’s very hard to understand the girls giving advice about men’s fashion.“

Elle Macpherson, the show’s host, calls him out as “Aussie-chauvinist” and Simpson steps in to defend women of the industry and beyond. “I’m a little bit offended — not a little bit, a lotta bit. To talk down to a women in this business? We’re runnin’ the world right now, okay?!“

As the audience cheers, she and Richie reiterate their purpose on the show. “I’m trying to help you, I’m trying to be nice, ’cause I really kinda wanna hit you across the face right now!” jokes Simpson, somewhat.

She also adds another key point: “You know there’s two women buyers behind you, right?”