It’s here! If you want to see what’s up with vampy Bella and her new little half breed, head out to the opening weekend of The Hunger Games and you’ll be in for a serious Twi-treat. 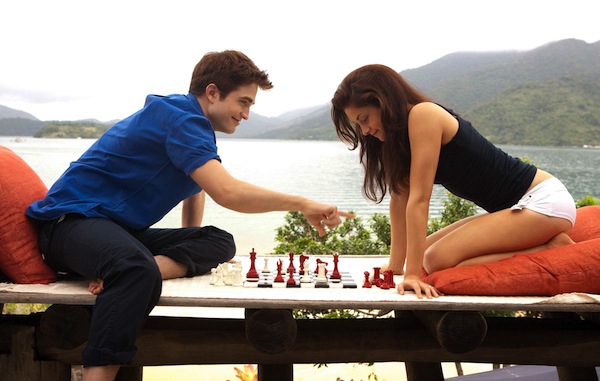 Kept behind locked doors in a hidden studio in Los Angeles are the images Twilight fans have been waiting months to see — the new trailer for the latest episode in the popular vampire romance series, The Twilight Saga: Breaking Dawn Part 2.

For one weekend only, when the feature film based also on the popular book series of the same name, The Hunger Games, debuts on March 23, Twilight fans will have the chance to see the new trailer for Breaking Dawn Part 2 only in theaters.

When we last left Bella (warning spoiler alert — although if you haven’t rented Breaking Dawn Part 1 yet, you are seriously behind the Twilight times), she was fully transformed into her vampire self, although all that was shown to audiences was the first time she opened her eyes as a vampire virgin.

We’re hoping this next edition shows what life is like for the brave teen who is about to embark on the journey of a lifetime into the world of the undead.

Starring Kristen Stewart, Robert Pattinson and Taylor Lautner, this final episode in the saga begins shortly after the birth of Renesmee, the daughter of Bella and Edward.

The Volturi, the royal vampire family who determines all the rules and boundaries for these creatures of the night, gets word of the new half-human/half-vampire baby and wants nothing more than to investigate this new species for all its power.

Edward’s family bands together to try to protect the baby from the growing threat.

Audiences can catch a glimpse of the first trailer before anyone else in theaters Friday, Saturday and Sunday of the opening weekend of The Hunger Games. On Monday, March 26 the trailer will be released wide on the internet.