Trisha Yearwood loves to cook and share her creations with others. Now, we can get in on her Southern-style goodness, thanks to her new Food Network show. 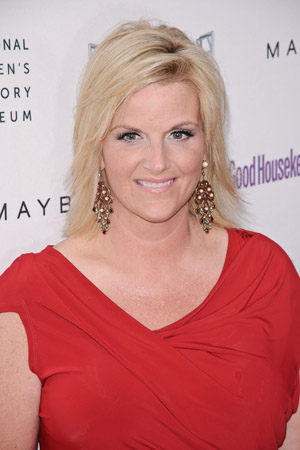 Trisha Yearwood is enjoying both sides of life: She’s still a successful country music singer and enjoys a happy home life with her husband, Garth Brooks, and three stepdaughters. Now, Yearwood wants to share her happiness — and fondness — for cooking on her new Food Network show.

“For me, cooking is very connected to my family and friends,” Yearwood said in a statement about joining the network that features other well-known chefs like Paula Deen and Anthony Bourdain. “Every recipe on the show carries wonderful memories with my loved ones — and I can’t wait to share my meals, stories and family photos with Food Network viewers.”

Trisha’s Southern Kitchen, debuting on April 14, will share her tips for creating some of her favorite dishes. She’ll also show how to “lighten up” the traditionally-fatty Southern cooking she loves.

“I love cheese, and I love cheese in everything,” she told Redbook in 2010. “Macaroni and cheese is probably one of my favorite things in the world. I don’t care if it’s from a box or a school cafeteria. In this book, I’ve included a Crock-Pot recipe for mac and cheese that is one of the best things in the whole world. I can’t make it that often, because I will eat the entire thing. But my motto’s always been, Everything in moderation — including moderation.”

This isn’t Yearwood’s first foray into cooking. The avid chef has released two cookbooks over the years, Home Cooking With Trisha Yearwood and Georgia Cooking in an Oklahoma Kitchen: Recipes From My Family to Yours.

She’s even got her superstar hubby into cooking.

“Garth is such a gentleman. He doesn’t even drink coffee, but he makes my coffee every morning. And if I’ve gotten in late because I was on the road and slept in a little later, the first thing I can smell when I wake up in the morning is the coffee and the bacon,” she told Redbook. “And I’ll walk into the kitchen and he’s got it all going on. He puts together these fantastic breakfast bowls, and you really don’t need to eat again all day after you’ve had one. It’s pretty fantastic.”

Will you watch Trisha Yearwood on the Food Network?

32 mins ago
by Giovana Gelhoren