Maybe The Voice wasn’t just an audition process for the aspiring singers in the battle rounds — three esteemed singers have signed on to mentor ABC’s Duets. 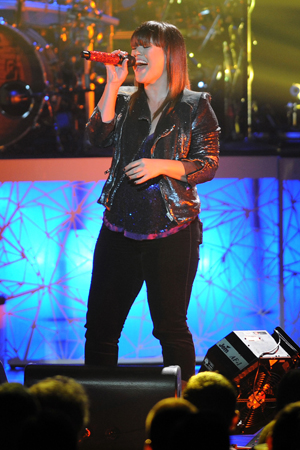 After the first episode of The Voice‘s battle rounds aired this past Monday on NBC, competing network ABC has announced that three of the musicians who initially aided Blake Shelton, Adam Levine and Christina Aguilera will soon be regular mentors themselves.

ABC has revealed that Kelly Clarkson, Robin Thicke and Lionel Richie will join Sugarland’s Jennifer Nettles as mentors and singing partners on Duets, the network’s new singing reality competition that premieres this summer.

The four superstars will scout talent across the country before ultimately choosing two singers as their duet partners. Every week, the mentors and their picks will perform, and the last aspiring singer standing will get a recording contract with Hollywood Records.

“The simple fact that I get to go out and find two people that I believe in, sing with them every week, and help them accomplish their dream is an amazing thing that I can’t wait to be a part of,” said Clarkson in a statement.

Robin Thicke added in a statement that Duets “is unlike anything that’s out there right now… The opportunity to work with such talent, both the other artists and contestants, is definitely going to make for an exciting competition.”

Jennifer Nettles is excited for Duets to be her televised mentorship debut. “Most of my greatest learning was from singing and playing with other performers throughout my life and career,” said the Sugarland singer in a statement. “To have had the opportunity to perform with an established artist would have been so incredible when I was up and coming.”