Rihanna gets enough criticism from the public. Should she be getting it from her father, too? The guy has some pretty harsh words about her body and some pretty horrible advice about her love life. Read on to find out what he said. 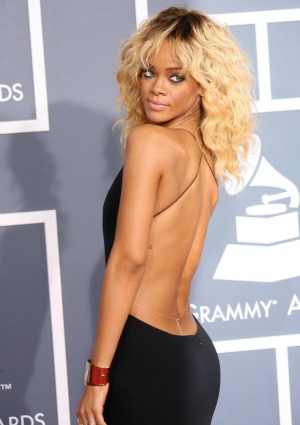 Here are some appropriate reactions of a good father when some d-bag smacks around his little girl: Rage. Grief. Gun purchases.

Here is an inappropriate reaction of a father whose little girl had the tar beaten out of her by some d-bag: Anything that comes out of the mouth of Rihanna‘s father.

In a new interview with Heat magazine, Ronald Fenty said Chris Brown is just a nice guy who made a mistake and Rihanna should get back together with him if she wants — which we all know is what this whole song collaboration is really about.

Jay-Z thinks Rihanna is off her rocker >>

“Chris is a nice guy and everybody’s entitled to make mistakes in their life. God knows how many I’ve made,” Fenty told the magazine when asked about the singer collaborating with her ex on two songs. “She’s her own woman now.”

Also, he thinks Rihanna was too fat last year, so thank goodness she slimmed down before he accompanied her to the Grammys because who wants to walk the red carpet with a fatty?

“I actually thought she was a little fat the last time I saw her,” he said. “When I saw her at this year’s Grammys, I thought she was back to her normal size. I used to joke with her, ‘Robyn, you’re getting too fat.’ But I think she’s fine. I think she looked excellent, as everyone saw, at the Grammys. She’s dieting, she’s working out.”

What a treat. Rihanna was estranged from her father for several years until they reunited in 2010. We can see why.