23 years of marriage have done nothing to dampen the fiery love between Kyra Sedgwick and Kevin Bacon. The actress tells all — much to the embarrassment of their two children. 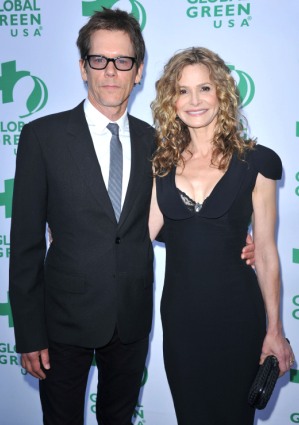 Kyra Sedgwick and Kevin Bacon are one of the few Hollywood couples to have stood the test of time. What’s their secret? According to the actress: sex.

Speaking about why her 23-year marriage to Kevin Bacon is still going strong, Kyra Sedgwick explained to Redbook, “Well — I’m going to embarrass my kids — sex is important. Sex is really important. That desire is there…”

“The essence of it hasn’t really changed. When he walks into a room, I’m still… I mean, my heart gets a little fluttery and I think, ‘Oh! He’s so cute. He’s so hot.’ That’s literally the first thing I think. You can ask people on the set — it’s palpable. He’s still a mystery to me. And getting older together is scary and exciting.”

Kyra Sedgwick and Kevin Bacon may be getting older, but that doesn’t mean they’re beyond trying new things. The pair (who found out through a television show that they’re actually distant cousins) recently got their first tattoos together!

Explaining how the Bacon/Sedgwick ink came to be the 46-year-old shared, “It’s a family tattoo, with all of our initials. We were going out to dinner one night in L.A., and we walked past this tattoo place on Melrose and I said, ‘Let’s eat dinner and then go get a tattoo’ — as a joke.”

“As we were eating, Kev started doodling this image of the four of our initials. Kevin, who always swore he’d never have a tattoo, said, ‘I’d do that.’ So a month later, we had it done.”

Check out the April issue of Redbook for more with Kyra Sedgwick!