Christie Brinkley’s ex is trying to deflect attention from his bad behavior back onto the supermodel. What does the cad have to say for himself this time? 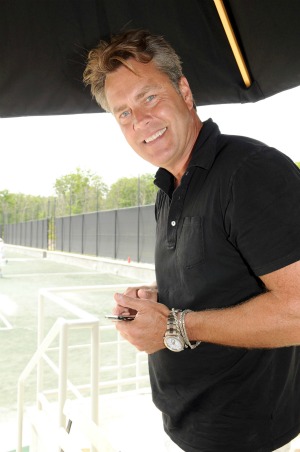 Cook sat down with ABC News to dispute Brinkley’s allegations that he’s a deadbeat dad who owes her thousands of dollars in support for their two kids, claiming that Brinkley made their latest court battle public “to coincide with her return to the stage in Chicago.”

“She can use her celebrity to get the media to say ‘He’s a bad guy.’ You know… I’m not trying to sell tickets to anything. I don’t want this press. I’m not interested in it. And there’s got to be a better way for her to do it. Go do a charitable act or something, get your name in the paper. But stop throwing your family under the bus,” Cook told Elizabeth Vargas.

“I don’t know how you can ever rationalize your way out of fighting to have this private family matter become so public. And children will live with it forever,” Cook complained. “I mean, it used to be 40 years ago, it was in the newspaper and it ended up under a bird somewhere. But now it’s Google eternity. This will never go away for my children… The real victim in this is not me. It’s the kids, who have to have this re-hashed and brought back in the public eye over and over and over again. It’s unnecessary.”

Brinkley’s attorney, Tom Campagna, released a statement in response to Cook’s interview. “Peter Cook has repeatedly broken the confidentiality agreement that Christie has continued to uphold,” he said. “Peter is the only one to go on national television spewing sexist, disgraceful, demonstrably false lies, which gives a taste of what Christie has had to endure since Peter betrayed his marriage vows. Peter embarrassed himself and hurt his family by having an affair with a teenage girl and admitting to an extensive pornography habit.”

“While Christie, a single mother who has been the sole provider for her family, was working on Broadway, he refused Christie access to her children on her one day off. Four months ago, Christie quietly asked the court for Peter to fulfill his child support obligations, and most importantly, to uphold the anti-harassment order preventing his pattern of intimidation and smear campaigns. Sadly, he has chosen to make this his own self-serving publicity tour without regards for his children.”

We say Peter Cook can cry us a river.