On the Tuesday night mystery drama The River, the missing adventurer finally took center stage and punched up the series’ strongest hour yet. But was this memorable installment too little, too late? 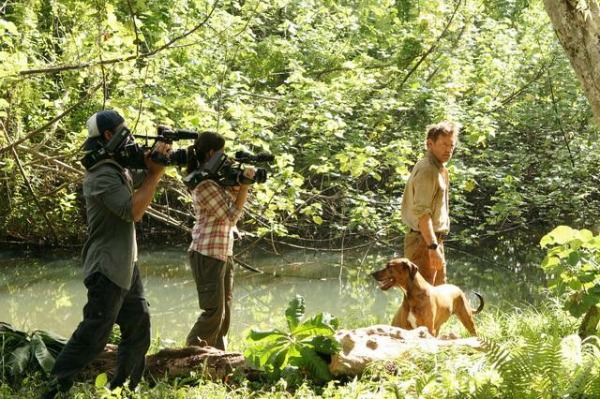 The hunt for intrepid adventurer Dr. Emmet Cole continued on last night’s installment of The River, as the freshman ABC drama deepened its investment in a Lost-influenced atmosphere heavily characterized by jungle treks, creepy noises and frightening discoveries in unexpected places.

Where previous episodes focused heavily on the team dedicated to finding Dr. Cole, Tuesday’s storyline invested in a much-needed portrait of the good doctor himself, as our heroes discovered footage left behind by Dr. Cole and, by episode’s end, used it to follow his trail to a mysterious compound deep within the jungle.

The “found footage” storytelling device provided a strong foundation for the episode while finally shedding light on a character who, in the five previous hours, had registered more as an enigma than as a man.

But is Dr. Cole of sound mind, or is he gradually losing his marbles? That, it would seem, is a mystery all its own. Throughout the found footage, Dr. Cole raved about ancient tribes with magical healing abilities, revealed his belief that Lena is “marked” for something incredible (a belief which seems to have some merit, judging by the mark on Lena’s neck) and even considered eating his dog in a moment of near-death desperation.

GBC mocks women of all faiths >>

Overall, it was a showcase night for actor Bruce Greenwood as television’s most rugged MacGuffin. Whatever the doctor’s mental state, the expedition in search of him continues in earnest: By hour’s end, Dr. Cole had broken his ankle in a painful fall and had been carried off by people unseen.

The character-focused hour was an effective one for The River, humanizing Dr. Cole and emphasizing his sense of integrity. In one of the episode’s most effective moments, he rebuffed the advances of a smitten young camerawoman by admitting he’s still in love with his wife, Tess — and, since the whole exchange was caught on camera, Tess was lucky enough to witness her husband’s display of moral fortitude. How sweet.

Elsewhere in the world of The River, Lena dropped a bombshell of her own, confiding that she (and not Dr. Cole) was responsible for setting off the beacon that prompted this whole search party in the first place. Good job, kid.

With just two more episodes slated for the season (and, it would seem, a slim chance at renewal), can ABC bring this winding River to a satisfying conclusion?