Katie Couric is putting in a request. When she’s dead and gone, here’s how you ought to remember her most important work. 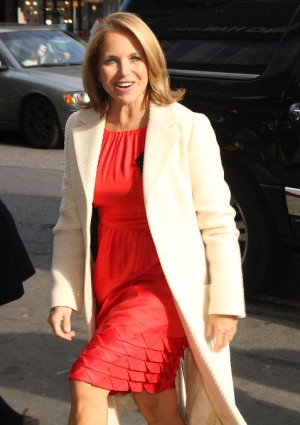 Katie Couric knows all too well her days on the planet are numbered. The woman who lost her husband to colon cancer in 1998 isn’t afraid to share how she wants people to remember her best.

Speaking to Prevention magazine Katie Couric explained, “I don’t mean to sound morbid, but I’m hoping that ‘cancer advocate’ will be the first line of my obituary. It’s definitely what I’m proudest of.”

That advocacy includes co-founding the National Colorectal Cancer Research Alliance and the Jay Monahan Center for Gastrointestinal Health in 2004 (named after her late husband) — though perhaps it’s her 2000 decision to have a colonoscopy on live television that did the most to wake the public up to the importance of back door health.

“I think journalism serves people — I do,” continued Katie Couric. “But on the other hand, the idea that I’ve actually saved a few lives along the way through advocacy is incredibly gratifying to me.”

Speaking of one thing she would have done differently during Monahan’s illness she shared, “I never acknowledged that I had given up hope. Sometimes I wish I had spoken with him about what we knew was inevitable. I really never had an opportunity to say goodbye to Jay, because I thought that accepting the fact that he was going to die — whether it was too painful or… I don’t know.”

Odds are cancer will be a recurrent topic on the 55-year-old’s upcoming show, Katie, set to debut this September.

“One of the things I’m most excited about is being able to help people navigate or understand medical information or certain illnesses better,” Kate Couric said. “If I can accomplish that, it’d be great. I’ve gone through a lot of medical situations, through Jay and my sister [Emily, who died in 2001 from pancreatic cancer], and my dad had Parkinson’s. So I’m sort of the family advocate — I try to learn all I can to be helpful to my family members.”