Enrique Iglesias will not be marrying Anna Kournikova. He’ll knock her up and start a family, sure, but walking down the aisle is out of the question. 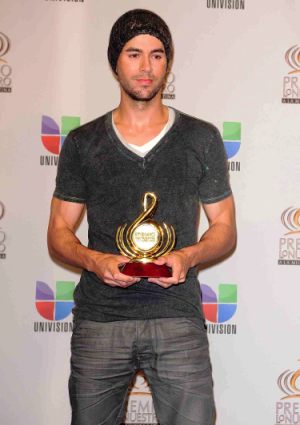 Anna Kournikova has Enrique Iglesias’ parents to blame for her unwed status. The singer and the tennis player have been a happy couple for over a decade, but his childhood trauma means the pair will never tie the knot.

Speaking of his anti-marriage stance, Enrique Iglesias said during a recent interview, “I’ve never really thought marriage would make a difference. Maybe it’s because I come from divorced parents, but I don’t think you love someone more because of a piece of paper.”

The 36-year-old is, of course, son of famous singer Julio Iglesias. The Spanish singer wed journalist Isabel Preysler in 1971, and had a trio of children. Enrique, youngest of the brood, was just 4 years old when his parents’ marriage was annulled.

Despite being quite clear about his resolve not to marry, rumors have circulated that Enrique Iglesias and Anna Kournikova secretly wed years ago. Adding fuel to that fire was the singer’s use of the word “wife” when referencing his sweetheart during a concert in Russia last year.

“It was just meant to be sweet in the moment,” he explained to Parade when asked directly about the incident. “I honestly didn’t mean to confuse people. I thought it’d be easier for the audience to understand than if I said ‘my girl.'”

That “girl” may someday become mother to his child. Enrique Iglesias further affirmed his anti-marriage position by explaining, “And nowadays, it’s not taboo to have kids and not be married. What makes a difference is that you’re a good parent, period.”

Do you agree with Enrique Iglesias that marriage doesn’t matter anymore?