Snooki’s pregnancy and engagement rumors can now be settled with three little words: It’s all true! The Jersey Shore star has fessed up, freaked out and given up her partying ways. 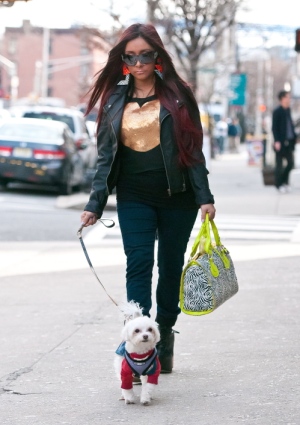 The gossip mill has gotten it right! Not only is Snooki pregnant, she and baby daddy Jionni LaValle are getting married. After weeks of speculation the Jersey Shore star has confessed: It’s all true!

Before the end of 2012 Snooki and Jionni LaValle will be parents. Freaked out by the Snooki-pregnancy-apocalypse? The 24-year-old was too, upon finding out she was carrying a fist-pumping fetus.

In a new Snooki interview the pickle princess told Us Weekly she discovered her pregnancy “right after New Year’s.” Her first thought: “‘S**t, I’ve been drinking!’ I was worried. It was New Year’s Eve and we were in Vegas, so I did go crazy.”

Since then, Snooki’s pregnancy news has sunk in, so she’s sobered up, and has no shame about being 15 weeks along with Jionni LaValle’s baby.

“I have different priorities now,” the once notorious party girl said. “I don’t care what anybody else thinks. As long as I know I’m ready and he’s ready.”

Added LaValle: “We are not going to screw this up.”

Snooki pregnant: Who will endorse the baby? >>

According to the magazine Snooki almost did screw up her own engagement, however. The cover touting Snooki’s pregnancy interview reads, “A newly engaged Snooki opens up about her panic after drinking in the first month, how she nearly ruined Jionni’s sweet proposal and her doubtful future on the Shore.”

Snooki, pictured here walking her pooch to doggy daycare in New Jersey (of course!) on Monday, is likely due August. Baby names reportedly under consideration are Jionni Jr. for a boy, and Giana for a girl.

Care to send Jionni LaValle and Snooki a pregnancy and engagement congratulatory wish?