Kristin Scott Thomas, a unique blend of elegance, beauty and sophistication, is more than just an actress. Learn more about this mother of three and recipient of France’s highest civilian award as she steps into our Star Spotlight! 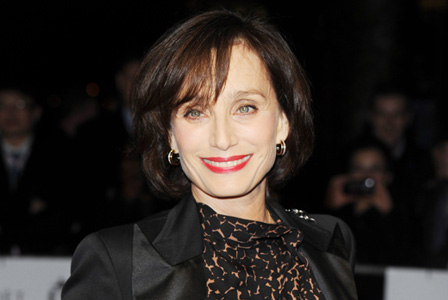 Being the eldest of five siblings who lost both their father and their stepfather to the same tragic fate, Kristin Scott Thomas managed to help her mother look after their family while still pursuing her dreams as an actress. At age 5, Scott Thomas lost her father, a Royal Navy Pilot, to a plane crash. Just six years later at age 11, her stepfather met the same demise. While her mother discouraged her acting dreams and enrolled Scott Thomas at the Cheltenham Ladies College in England, it was only a matter of time before she dropped out at age 16 and began taking a serious interest in drama.

At the age of 18, Scott Thomas left England for a two-week trip to Paris to visit friends, but ended up staying there permanently after receiving a job as an au pair. It was also in Paris where Scott Thomas met her future husband, Dr. François Olivennes, who she was married to for 17 years and has three children with.

With the support of her friends in Paris, Scott Thomas decided to try her hand at acting and enrolled in L’Ecole Nationale des Arts et Techniques de Theatres where she performed in several small on-stage roles and eventually even on television. Over time, Scott Thomas obtained recognition in France as an actress and landed her first leading role in 1988 in the English film, A Handful of Dust.

In 1990 Scott Thomas’ film career began to take off outside of Europe after appearing in films such as Bitter Moon and Four Weddings and a Funeral, alongside Hugh Grant. She also worked with Harrison Ford in the 1999 film Random Hearts, and has since appeared in many notable films such as The Other Boleyn Girl with Natalie Portman and Scarlett Johansson, The Golden Compass, Mission: Impossible and many other European and American films.

Aside from her achievements as an actress, Scott Thomas has been recognized as one of Empire Magazine‘s 100 Sexiest Stars in film history and also by People Magazine as one of the 50 Most Beautiful People in the World. In 2008 she won a Laurence Olivier Theatre Award for Best Actress for her performance in The Seagull. Perhaps most notable, Scott Thomas was awarded Legion d’Honneur, France’s highest civilian award in 2005. The Legion d’Honneur is awarded to those dedicating at least 20 years of service in the military or civilian life to scholarship, arts, sciences, politics and other fields that enhance France’s reputation.

Kristin Scott Thomas is currently living in Paris with her two youngest sons after the release of her latest films, Woman in the Fifth and Bel Ami, while working on several films to be released in the coming year, including In the House, Cherchez Hortense, Only God Forgives, Seconds of Pleasure and The Invisible Women.

Woman in the Fifth: See the trailer

In Kristin Scott Thomas’ most recent film, The Woman in the Fifth, Scott Thomas plays a mysterious widow named Margit who walks into the life of an American college lecturer, played by Ethan Hawke, who has come to Paris in an attempt to put his life back together. The two strangers form a passionate relationship which triggers inexplicable events that no one expected. Adding to the suspense is the beautiful Margit’s possible connection to a string of murders.