Emily Blunt is one of the hottest actresses out there right now — and her talent will ensure she stays that way. Read on to learn all about this gifted actress as Emily Blunt steps into the Star Spotlight! 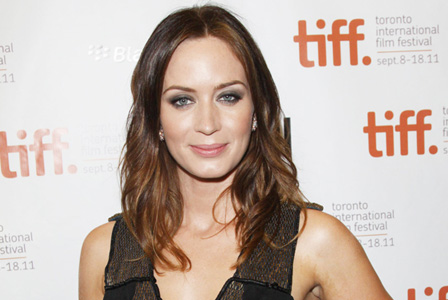 Allow us to be blunt: Emily Blunt is on track to be one of the most important actresses of her generation. This British-born talent has starred in everything from costume dramas to thrillers to comedies alongside such luminaries as Meryl Streep, Anne Hathaway, Susan Sarandon, Tom Hanks and Julia Roberts, and has more than held her own.

Salmon Fishing in the Yemen takes a leap on love >>

After her discovery by a British agent while she was still in high school, Blunt honed her acting chops on the stage while performing at the 2000 Edinburgh Fringe and with the National Theatre and Chichester Festival Theatre. She made her TV debut just a few short years later in the drama Boudica, then continued her critically-acclaimed run later that same year as Catherine Howard in Henry VIII.

Since 2000, Blunt has made no less than 31 film and TV appearances, including her roles in the upcoming films The Five-Year Engagement, Looper and Arthur Newman, Golf Pro. Nominated for a BAFTA and two Golden Globes (for The Devil Wears Prada, Gideon’s Daughter and The Young Victoria, respectively) means Blunt is permanently on the map as a hot Hollywood star to watch.

With an acting range that moves comfortably between comedy — like her turn in The Devil Wears Prada, for which she was voted Best Female Scene Stealer by Entertainment Weekly — and drama — like her mysterious ballerina in The Adjustment Bureau — Blunt’s versatility and accessibility to the audience translate to lots of work for this young newlywed.

Salmon Fishing in the Yemen trailer gives a little faith >>

Blunt married fellow actor John Krasinski of The Office in Lake Como, Italy in 2010, but the glow of young love hasn’t slowed her down a bit. She had five movies released in 2011 alone, including Gnomeo & Juliet, The Adjustment Bureau, Your Sister’s Sister, The Muppets and Salmon Fishing in the Yemen with Ewan McGregor and Kristin Scott Thomas. 2012 is jam-packed as well with the above-mentioned three flicks awaiting release.

We have a feeling we’ll be seeing Emily Blunt for years to come.