SheKnows sits down with Salmon Fishing in the Yemen stars Ewan McGregor and Emily Blunt to talk about faith, fish and falling in love.

Ewan McGregor is a fish doctor. Emily Blunt is a woman who needs a fish doctor. It’s England. They’re both adorable but not very in touch with their feelings. Sounds like a recipe for true love if either of these tight-lipped professionals has the courage to say how they feel in the screen adaptation of the popular book Salmon Fishing in the Yemen.

“I loved it because it struck me as being very realistic,” says McGregor, as he and Blunt got very chummy during their press interview at the Beverly Wilshire Hotel in Beverly Hills. “It’s a love story of the real world.”

Blunt agrees with her co-star’s take on the movie. “It’s quite anguish for both of them,” she says of her character who falls in love with McGregor while working on the insane project her boss has assigned her to complete — bring the sport of salmon fishing to the Yemen. “They sort of find some comfort in each other… It’s not lust, it’s a real love,” she says. 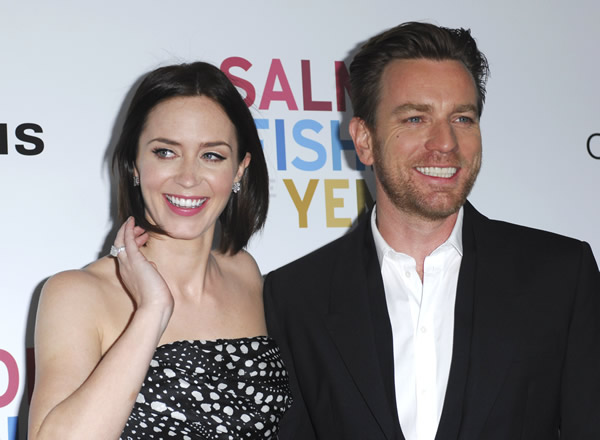 Is a slow-burn romance steamier?

“I think it’s quite tantalizing,” Blunt says of the romance that creeps up on you.

When asked if either of them had ever fallen in love in such a way, Blunt was quite coy. She wouldn’t give away any secrets, but McGregor on the other hand was quick to respond with a resounding, “Yes!”

McGregor ultimately wouldn’t give up the details on who that lucky lady was, but Blunt boasted that she’d find out the answer as soon as I left the room. Wonder who it was that would have been his real-life counterpart if Salmon Fishing in the Yemen was a true story…? Maybe Emily Blunt will be the only one to know.