Nick Lachey is more than excited to become a first-time dad, but he won’t be getting a bird’s eye view in the delivery room. Find out why he’s not going to see the miracle of birth for himself. 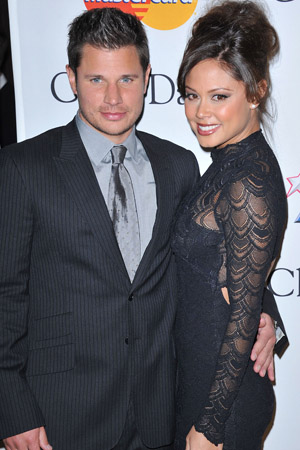 Nick Lachey returned to host Live! With Kelly on Tuesday, but all he could really talk about was his new role as expectant father! On Monday, Lachey revealed that his wife, Vanessa Minnillo, is pregnant with their first child.

“Later that night, she was in New York and I was in the Bahamas,” he told co-host Kelly Ripa. “She went to the store and got a pregnancy test and it came back positive. We’re having a baby!”

Minnillo is due in late summer or early fall, according to Lachey. We can’t blame him for keeping mum on the details, but he’s not so secretive with every part of the baby-making process — namely, he won’t be looking over the doctor’s shoulder when his wife gives birth.

Nick Lachey was dragging his feet on babies >>

“I’ve been told — because that’s what happens now, I’m told things — that it’s going to be a waist-up situation, if you know what I mean,” he joked to Ripa. “I’m gonna be there, I’m gonna be supportively there, holding hands, and coaching, breathing, all that good stuff,” he continued. “But apparently I won’t be down below, seeing what’s happening. I’ll be up above, helping.”

His choice came after a particularly horrific experience a few years ago. Lachey revealed that he volunteered to film the birth of his buddy’s child and got more than he bargained for.

The former 98 Degrees singer would rather keep the whole thing fun, rather than bloody.

“My work there is done!” he joked of his wife’s pregnancy. “I was successful there. So we’ll keep it waist-up.”

Pretty sure Minnillo has the final say on whether or not you get an up close and personal look at the birth, Nick.