Tiny Tila Tequila is in a world of hurt. The former reality star has reportedly suffered a brain aneurysm that almost killed her — but was she trying to do herself in? 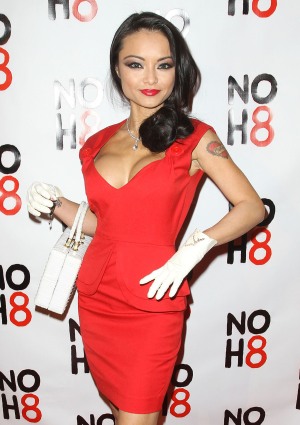 Tila Tequila has reportedly suffered a brain aneurysm that set a string of self-harming events into action. Depending on your gossip source it was either all a terrible accident, or a death wish.

The troubled reality star was released from the hospital Monday after spending nearly a week being treated, but nonetheless may have permanent brain damage.

The chain of events regarding Tila Tequila’s health apparently began in the middle of the night over a week ago when the 30-year-old suffered a brain aneurysm, which caused her to think irrationally. A source told RadarOnline she then took two bottles of heavy prescription drugs in an attempt to cope with the pain.

“Tila threw up all over her bed after overdosing and felt like she was dying,” explained the unnamed source. “She was screaming for help, and in desperation, broke her bedroom window and attempted to jump out.”

“Finally a friend came over after getting a strange text from her and found her convulsing on the bed. He called an ambulance and she was taken to the hospital.”

“It’s sad to think she may have some permanent brain damage,” the source added. “She still can’t fully speak properly.”

Get ready, NYC: Tila Tequila is coming for you >>

Tila Tequila, who was the focus of the two-season MTV reality show A Shot at Love with Tila Tequila, has reportedly dropped from 100 pounds on her 4-foot-11-inch frame to just 78 pounds. Despite having been in the hospital for a week already, she is reportedly planning to now check into an outpatient program.

However, the story of Tila Tequila’s health woes takes a slightly different tone according to TMZ‘s sources. The gossip site makes no mention of a brain aneurysm, but reports the star’s roommate told police Tila had “tried to kill herself all week.” Their sources say Tila was in and out of consciousness in the house when they arrived, and officials made the call that she required psychiatric help.

Here’s hoping Tila Tequila gets the help she needs!