3-year-old Vivienne Jolie Pitt was spotted with her family over the weekend sporting a set of big, bright red lips. Is she copying her mom’s glam ways already? 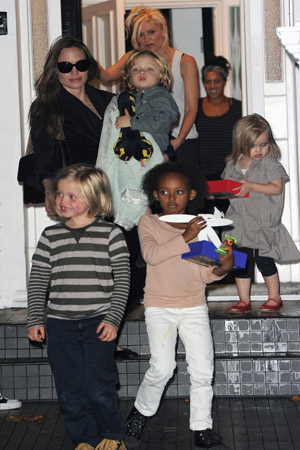 Angelina Jolie and Brad Pitt’s brood stepped out into public over the weekend — and for once it wasn’t Jolie that stole the show! The couple’s 3-year-old daughter, Vivienne Jolie-Pitt, caught the attention of photographers when she wore a bright red hue on her toddler lips.

“With her famous mom in a trench coat, aviator shades and bold red lipstick and Shiloh in a T-shirt, shorts, and sneakers, little Viv stood out in [her outfit] — plus, just like her glamorous mom, bright red lipstick!” US Weekly wrote of Jolie-Pitt’s little look.

Some were taken aback that her famous family would let her go out in public like that. However, we doubt she’s already vamping up her look — she’s probably just playing dress-up. And why not? Jolie told Vanity Fair last year that they encourage their children’s individuality — including daughter Shiloh’s tomboy preferences.

“[She’s] like a little dude,” the sexy actress said. “Shiloh, we feel, has Montenegro style. It’s how people dress there. She likes tracksuits, she likes [regular] suits. She likes to dress like a boy. She wants to be a boy. So we had to cut her hair. She likes to wear boys’ everything. She thinks she’s one of the brothers.”

As for the twins? Mama Jolie said they are “classic boy and girl. She’s really female. And he’s really a little dude.”

The whole point is that her children are happy, which is what any good mother would want.

“I got back from work last night, and everybody was playing music and dancing and I suddenly found myself dancing around with a bunch of little fun crazy people.”

We love it, go on with that red lipstick, Vivienne!

Vivienne Jolie-Pitt’s red lipstick: Cute or too old for a 3-year-old?