Rush Limbaugh is sorry for calling Sandra Fluke a slut now that his advertisers are jumping ship in droves. What does the law student think of his mea culpa? Not much. 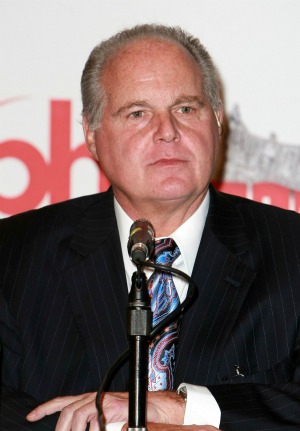 Rush Limbaugh is no stranger to controversy, but calling a woman a “slut” and a “prostitute” for wanting access to birth control pills is going too far even for this ultra-conservative talk show host. Now Limbaugh is backtracking on his words — but is his apology sincere?

“It was way beneath me, and way beneath you. I was wrong. I genuinely apologize,” he added.

Limbaugh also issued an apology on his website, writing, “For over 20 years, I have illustrated the absurd with absurdity, three hours a day, five days a week. In this instance, I chose the wrong words in my analogy of the situation. I did not mean a personal attack on Ms. Fluke,” the statement read. “My choice of words was not the best, and in the attempt to be humorous, I created a national stir. I sincerely apologize to Ms. Fluke for the insulting word choices.”

Why is he so sorry all of a sudden when he seemed pretty vehement about his argument just days earlier? Maybe it has something to do with the fact that the advertisers who line his pocket with dough are pulling out of their contracts in droves. As of this writing he had lost eight major sponsors, including ProFlowers.com, Quicken Loans, Sleep Train, Sleep Number, Citrix Systems Inc., Carbonite, LegalZoom and AOL.

“At AOL one of our core values is that we act with integrity,” Maureen Sullivan, an AOL spokeswoman, said in an statement. “We have monitored the unfolding events and have determined that Mr. Limbaugh’s comments are not in line with our values.”

Fluke isn’t buying the so-called apology. During an appearance on The View, the 30-year-old Georgetown Law student said, “I don’t think that a statement like this issued, saying that his choice of words was not the best, changes anything, and especially when that statement is issued when he’s under significant pressure from his sponsors who have begun to pull their support.”

But Limbaugh denies the money has anything to do with it because according to him he has major companies banging down his door for air time.

“I reject millions of dollars of advertising a year, much to the chagrin of my ad sales team,” Limbaugh said.”…We’re going to replace those that leave. Fine, we’ll replace [you].”

Tell us: Are you buying Rush Limbaugh’s apology?