Ricky Gervais has made himself yet another enemy, and this is one you’d never suspect: singing sensation Susan Boyle. What happened to start this feud? 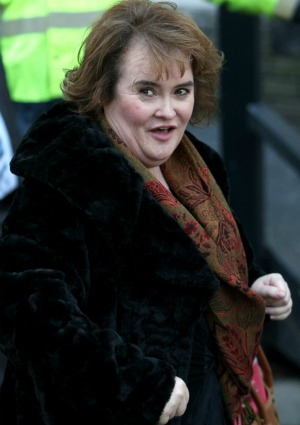 Remember when all that controversy went down with Ricky Gervais calling people mongs, and how there was a big backlash because so many people found it to be an offensive slur toward people with Down’s Syndrome, but he played it off that he was reclaiming it like the word gay?

He’s at it again. He was back in October, at least, when he mocked singer Susan Boyle in a televised stand-up routine.

“I don’t think she’d be where she is today if it wasn’t for the fact that she looked like such a f*****g mong. There is no better word to describe Susan Boyle,” Gervais said during the performance. “When she first came on the telly, I went, ‘Is that a mong?'”

After several viewer complaints Great Britain’s Channel 4, who carried the performance, determined that Gervais had not breached the guidelines of offensive content.

Now, months later, Boyle — a Britain’s Got Talent winner who has three number one albums that have sold more than 17 million copies — is speaking out against Gervais’ slam about her looks, just in time to promote her new musical revue I Dreamed a Dream.

“I’ve had a lot of insults,” she told The Sun. “Do you know what I do? I ignore them. I just get on with my life. Those who have something to say usually have nothing to do.”

“I can take whatever Ricky says, because I’ll tell you something — he’s the one with the problem, not me.

“Ricky’s a talented man but he’s wasted himself with those comments. I think people who liked him are not so keen now.”

“Isn’t it funny that none of the reports on the Susan Boyle gag mention that within the actual routine I say I don’t mean Down’s Syndrome,” he wrote.

“…And that the routine is about reverse image exploitation and the changing meaning of words. Have they watched the actual routine? No.”

Tell us: Should Ricky Gervais use the word mong in any context?