The famous wife of Mad Men’s Don Draper, played by January Jones, is taking her career to the next level with a wealth of new starring roles, none of which are in period pieces where she plays a tight-lipped stay-at-home mom. 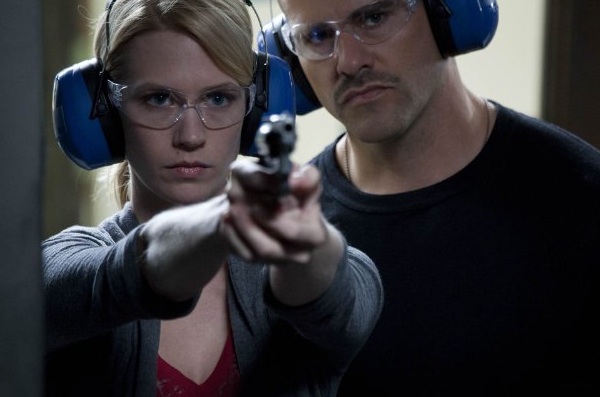 Before January Jones came onto the scene, the 1960’s housewife was a lovely 2-D version of a woman long forgotten. But when the 34-year old actress from Sioux Falls, South Dakota, embodied the prim yet sultry housewife to the famed Don Draper, the man with more than one double life lurking in the shadows, she surprised audiences and critics alike.

But Mad Men isn’t the only thing she knows how to do well. She didn’t stop with one-hour TV dramas. Recently, she’s been embracing every other type of genre she can get her hands on.

She’s Nicolas Cage‘s wife in the new thriller Seeking Justice. Jones plays Laura Gerard in the story about a husband who goes to great lengths to exact revenge on his wife’s attacker. Little does he know, the men who help him with this endeavor want to be paid back in ways he never thought imaginable. The action thriller releases in theaters March 16 and co-stars Guy Pearce and Jennifer Carpenter.

She’s a lady superhero and a villain, to boot. Jones played the crafty Emma Frost in the latest X-Man: First Class. An icy X-man to be exact. If you didn’t catch it last summer, the blockbuster hit had her shooting ice picks at James McAvoy and Michael Fassbender. Hot! I mean, cool! She told IGN she’d love to do another film. Emma Frost two, anyone?

She had a baby on her own. And she gave it a name that starts with an X. How cool is that? Xander Dane Jones was born on Sept.13, 2011. Jones has not revealed the identity of the father, but who cares? The baby is cute and she’s doing it with or without a man. Take that Betty Draper!