Kirk Cameron has caused quite a stir since telling Piers Morgan he thinks gay marriage is wrong. See who is speaking out against his unpopular opinion. 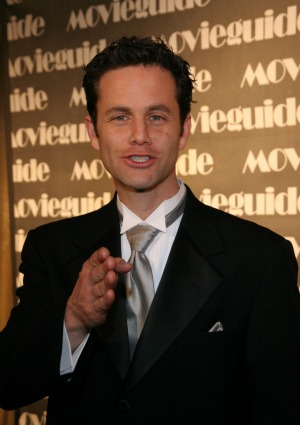 Kirk Cameron spoke out against gay marriage, and now many of his fellow actors are speaking out against him — except for the Scientologists, of course.

Twitter lit up with opinions from both supporters and detractors, but it was messages from Hollywood notables that really stood out — especially one from his Growing Pains father Alan Thicke.

“I’ll address kirk’s comments as soon as I recover from rush limbaugh’s,” Thicke wrote. “I’m getting him some new books. The Old Testament simply can’t be expected to explain everything.”

Other industry opponents struck out against Cameron’s sexual discrimination.

Jesse Tyler Ferguson wrote, “The only unnatural thing about me being gay is that I had a crush on Kirk Cameron until about 24 hours ago.”

Debra Messing wrote, “I want to thank Piers Morgan for his response to what he wud say to HIS child if (s)he came out: ‘Great, as long as you’re happy.'”

Roseanne wrote, “Kirk or kurt or whatever Cameron is an accomplice to murder with his hate speech. So is rick warren. Their peers r killing gays in Uganda.”

Dave Holmes wrote, “Remember yesterday afternoon, when Kirk Cameron’s views were none of our concern? Let’s restore America to that golden age.”

Martha Plimpton of Meet the Fockers fame wrote, “The word ‘equality’ shows up too much in our founding documents for anyone to pretend it’s not the American way. #usethe19th #equalitynow.”

As for Piers Morgan, while he does not agree with Cameron’s sentiments he did defend the actor’s right to voice them.

Calling Cameron’s beliefs “antiquated,” Morgan told TMZ, “I felt that he was honest to what he believed, and I don’t think he was expecting the furor that it created.”

Tell us: Do you agree or disagree with Kirk Cameron?