The MGM Grand hosts Mike Tyson for a week as he debuts a new one-man show. As Tyson discusses his polarizing past and fall from idolized athlete, fans can expect confessions and a question-and-answer session with the infamous boxer. 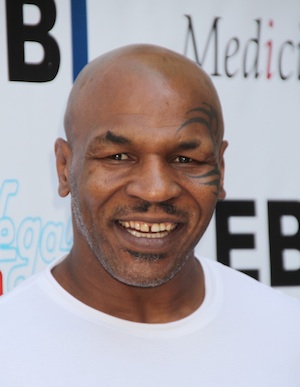 If you plan on heading to Las Vegas for some springtime R&R, you might be interested to know Mike Tyson will be at the MGM Grand for a one-week performance of his new show,  Mike Tyson: Undisputed Truth — Live on Stage.

So what exactly is the show about? Based on current reports, Undisputed seems to be an autobiographical story told through live music and videos. Co-writer of the show, Randy Johnson, says Undisputed is told in a monologue style with chances for the audience to interact with Tyson throughout the performance with questions.

Johnson sat down with the LA Times and talked about the show. “It’s a theatre piece, not a lecture, but a real one-man show.” He went on to liken Tyson’s Las Vegas debut to past shows such as Carrie Fisher’s Wishful Drinking and William Shatner in Shatner’s World: We All Just Live in It.

Undisputed will not be the first time Mike Tyson offers a revealing portrait of himself to the public. A documentary was released in 2009, Tyson, which discussed his turbulent career and personal life through a series of interviews with the former world heavyweight champion. The film was well-received by critics — Roger Ebert gave the film four stars. Ebert wrote in his review, “Here is Mike Tyson’s story in his own words, and it is surprisingly persuasive. He speaks openly and with apparent honesty about a lifetime during which, he believes, he was often misunderstood.”

And while Johnson hasn’t seen Tyson, it seems the show will carry the same theme, “We’re keeping this authentic.”

No word yet on just how much Mike Tyson will earn from the show. In 2010, while on The View, Tyson confirmed his dire financial situation, “I’m totally destitute and broke.”

Mike Tyson: Undisputed Truth — Live on Stage runs from April 13-18 in the Hollywood Theatre at the MGM Grand. Ticket prices start at $100 and run all the way up to $500 for VIP packages, which include front row seats and a meet-and-greet with Tyson.