Spunky actress Mila Kunis is way different than most actresses in Hollywood: She wants to gain weight, rather than lose it. 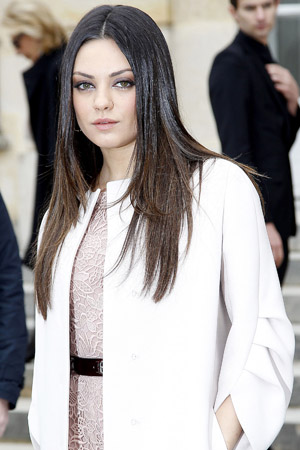 Black Swan actress Mila Kunis isn’t your typical Hollywood starlet: She’s outspoken and willing to call people out on their crap — just ask that Russian reporter she went off on while promoting Friends With Benefits. She’s the quintessential guy’s girl that girls actually want to hang with.

She opened up on her life — and unusual issues with her body — in the new issue of Harper’s Bazaar.

“People have interpretations of what you’re supposed to be like,” she said when asked about her gorgeous looks. “If you’re unattractive and overweight, you must have a great personality. If you’re attractive, then you must not be the nicest person. People are always taken aback that I’m easygoing but not necessarily stupid.”

She is obviously comfortable with herself, but she’d rather gain back the weight she lost for her role in 2011’s Black Swan.

“I’d be happy if my ass got bigger. All the weight that left my chest went to my side hip, my stomach,” she said. Kunis and co-star Natalie Portman lost a ton of weight for their roles as competing ballerinas. Kunis reportedly dropped to 95 pounds. She said that her body “has never been the same. My shape is different. When I got down to 95 pounds, I was muscles, like a little brick house, but skin and bones. When I gained it back, it went to completely different areas.”

However, she won’t turn to needles or surgery — unless she changes her mind.

“I will not put a needle in my body unless I have a medical reason,” she said. “But ask me in 10 years. Right now, I’m like, ‘I’m going to embrace it,’ but… I’m probably going to want to have something done. I have no doubt.”