Former Growing Pains actor Kirk Cameron recently spoke out against homosexuality and marriage equality, and his on-screen sister isn’t happy about it. 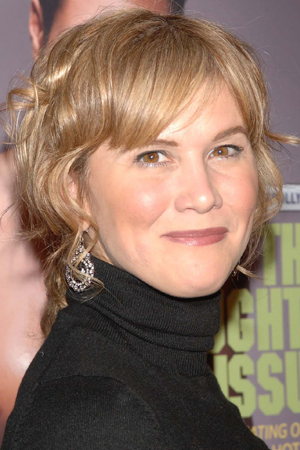 It’s not just an on-screen sibling rivalry anymore — actress Tracey Gold, who played the role of Carol Seaver on Growing Pains, is taking a stand against Kirk Cameron and his recent rant against homosexuality and marriage equality.

She took to Twitter to state her position on the controversial issue:

“I am a strong supporter of the #LGBT Community, and I believe in equal rights for all,” she tweeted yesterday. “#NOH8 #LOVE.”

Even more so, she also changed her Twitter icon to her NOH8 campaign image, showing her support of the legalization of gay marriage. Though she never mentioned her former co-star’s name, it’s clear that she’s addressing his recent appearance on Piers Morgan Tonight.

The actor, now involved in the evangelical Christian ministry The Way of the Master, boldly spoke his mind on Friday night:

“Marriage is almost as old as dirt, and it was defined in the Garden between Adam and Eve. One man, one woman for life till death do you part. So I would never attempt to try to redefine marriage. And I don’t think anyone else should either,” he said. “I think that it’s unnatural. I think that it’s detrimental, and ultimately destructive to so many of the foundations of civilization.”

He also clarified that he wouldn’t support any of his children if they revealed that they were ever hiding their sexual orientation from him.

“I wouldn’t say ‘That’s great, son, as long as you’re happy.’ I’m going to say, ‘There are all sorts of issues we need to wrestle through in our life. Just because you feel one way doesn’t mean we should act on everything we feel,'” he said.