Cate Blanchett is more of an old-fashioned gal when it comes to her beauty regimen than known as one to jump into any trends. However, there is a limit to how far she’s willing to go!

Related story How Cate Blanchett Explains Climate Change to Her Teenage Kids: 'It's a Terrible Conversation to Have' 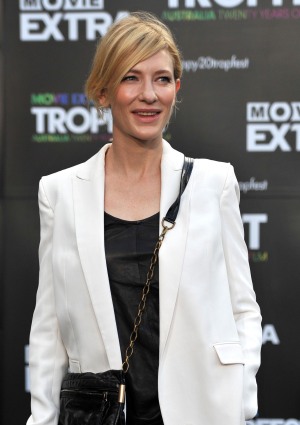 Cate Blanchett will not be caught with a freakish Botox face. The actress has shied away from modern-day beauty fixes in favor of decades and centuries old tricks for a flawless face — but there is one traditional treatment even she considers going too far.

Cate Blanchett shared her beauty “do” list with Fashion Etc, telling the magazine:

“I use essential oil, like emu oil. [Yes, that’s emu like the bird.] In indigenous Australian culture, that’s the first oil they put on a baby because it’s so hydrating. If you’ve got sunburn or you’ve got a scar or something it’s incredible. And papaw ointment.”

“Usually it’s ‘don’t do this’ and it’s usually from women who have done it. Don’t curl your eyelashes, and don’t overpluck your eyebrows. There are certain things I won’t do. I think blue eye shadow should only be applied by professionals.”

“I do the old glass of lemon juice in water in the morning. It just keeps your system going. I think it’s like people who get into colonic therapy — there’s a logic behind it. The French have been doing it, the Egyptians did it.”

At age 42 the actress looks fantastic thanks to her willingness to borrow a bit of beauty wisdom from here and there, though she does draw one firm line in the sand. “There are certain things in ancient practices that [I won’t do],” Cate Blanchett pointed out. “I’m not going to bathe in my own urine.”

Cate Blanchett has no patience for directing >>

Aside from a soak in mellow yellow the mother of three also won’t go under the plastic surgery knife. “There’s been a decade or so of people doing intervention with their face and their body. Now that we’re emerging from that people are seeing that long term it’s not so great,” Cate Blanchett shared of her plastic surgery views.

“I’m not sitting on a soapbox telling women what they should and shouldn’t do, but I know what works for me. I’d just be too frightened about what it means long term. In the end if you have all that stuff done… in the end you just see the work. It doesn’t fill me with admiration, it fills me with pity.”

Do you agree with Cate Blanchett’s list of beauty dos and don’ts?