Snooki and Jionni LaValle are getting married! The soon-to-be parents are double-timing life’s milestone moments by planning a wedding with baby already on the way. 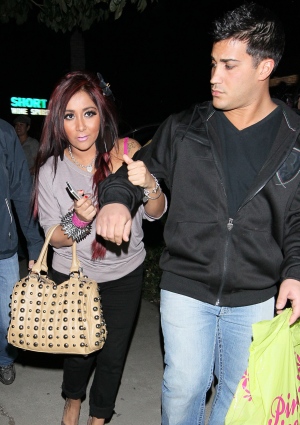 Raise a fist, Jersey Shore fans — there’s much to celebrate! Not only is Snooki pregnant, she’s engaged to baby daddy Jionni LaValle!

That’s right, Jersey Shore‘s pint-sized star is not only reportedly pregnant with a fist-pumping bundle of joy, she’s preparing to walk down the aisle. Word of Snooki’s engagement broke Monday morning, as People reported:

Not only is Nicole “Snooki” Polizzi expecting her first child with Jionni LaValle, but People has learned that the happy couple is also engaged!

Snooki pregnant: Who will endorse the baby? >>

Though the entertainment news source doesn’t go so far as to name their Snooki gossip source, the loose-lipped informant also confirmed Snooki’s baby is due later this year.

On Jan. 12 Snooki hinted a marriage proposal from baby daddy Jionni LaValle might be on the way. “I know he’s the one so I know the ring’s gonna come soon,” she commented. “Well, not soon-soon. He knows it should be big, cuz if it’s small I’m saying no. Like, ‘Get another ring!'”

Since then the Jersey Shore star has been uncharacteristically mum. Multiple sources have confirmed Snooki’s pregnancy is in fact on like Donkey Kong, but the 24-year-old has yet to come clean there’s a baby on the way.

It seems that Snooki’s dreams for a happily ever after may be just about to come true. Back in the early days of Jersey Shore filming in 2009 she shared her “ultimate dream is to move to Jersey, find a nice, juiced hot tan guy and live my life.”

It was in August 2010 that Snooki and Jionni LaValle met, and despite a dramatic breakup during season four when Snooki and the gang traveled to Italy, he’s now prepared to make her his pickle princess for life!

Congratulations on the wedding and baby news to Snooki and Jionni!