Actresses Christina Hendricks and Olivia Munn are allegedly the latest victims of leaked nude photos. Are the photos really them, or a clever photoshop ploy? 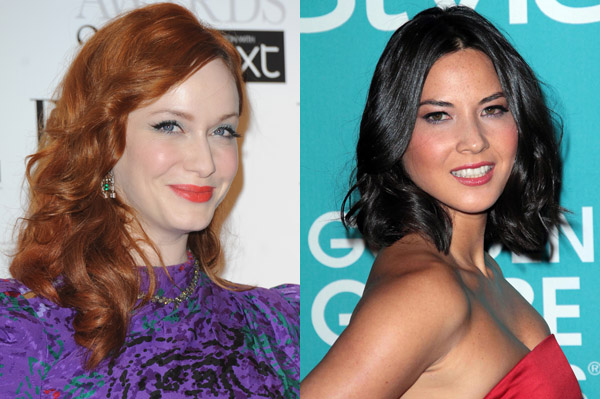 Were Christina Hendricks and Olivia Munn hacked? That’s what many are saying after an anonymous person posted photos on the web, alleging that they were nude shots of the actresses.

The NSFW photos — posted on Buzzfeed — show both Munn and the Mad Men star in various states of undress. However, the nude shots don’t include the actress’ faces, making us doubt that they are actually real.

Hendricks is already fighting back, telling TMZ that the partially clothed photos are hers, but the nude breasts shot is not. Munn hasn’t spoken out specifically on her nudes, but sources close to the Attack of the Show actress says they aren’t hers.

These two beauties are hardly the first celebs to get caught up in a nude photo scandal. Federal officials arrested a Florida man, Christopher Chaney, after he hacked into phones and stole nude photos from the likes of Scarlett Johansson, Vanessa Hudgens and Christina Aguilera.

“It started as curiosity and it turned into just being addicted to seeing behind the scenes of what’s going on with these people you see on the big screen every day,” the hacker told a Jacksonville, Florida television station after his arrest. “I know what I did was probably the worst invasion of privacy someone could experience. I’m not trying to escape what I did.”

He faces a maximum of 121 years in prison for his crimes.

The only person to actually fess up to her nude shots was Johansson, but she insisted they were innocent pictures sent to then-husband Ryan Reynolds.

Do you think the Christina Hendricks and Olivia Munn nude photos are real, or fake?