Snooki is about the only person in her life not talking about the possible pickle in her oven. Find out who is trying to make headlines with his predictions on Snooki’s baby. 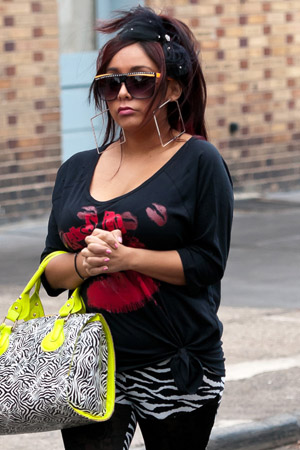 Jersey Shore star Nicole “Snooki” Polizzi still hasn’t spoken out on whether or not she’s pregnant with her first child. We can almost assume that the silence means it’s true, though we doubt we’ll hear anything until she promotes her new spin-off show with BFF JWoww.

However, her silence apparently means that everyone else in her life can make comments about it.

“I hope for her sake… not to be rude or anything… but I hope she has a miscarriage,” her ex, Emilio Masella, told TMZ.

Whoa, what a jerkface.

The bitter juicehead added that he thinks Snooki will be a good mother someday, just not right now. He’s convinced she’s only pregnant to improve her brand.

“[Snooki will] pull a Kim Kardashian,” he said, adding that she’ll get married for her spin-off show and will “have the baby and break up with him right after.”

That is, if Jionni LaValle is actually the dad of the possible baby Snooki, “Vinny could easily be the father.”

Does Masella actually know anything? Of course not, he just wants attention. However, someone actually “in the know” knows who isn’t the father.

Despite their conflicts, The Unit said he wishes his tiny adversary well.

What do you think: Will Snooki try to cash in on her little juicehead?